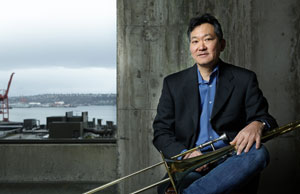 Chris Amemiya is originally from Hawaii and played euphonium in earnest in high school. He began playing the trombone in college but never studied formally, choosing instead a career path in science. Nevertheless, he never stopped playing music and learned to play jazz largely through self-study and the school of hard knocks. Chris' varied musical experiences run the gamut from gambling ships and salsa bands, to jingle recordings and R&B bands. He has played with many jazz, salsa and blues luminaries as a sideman and has performed and recorded with the "house" big bands of Ryles Jazz Club (Boston) and Tula's Jazz Club (Seattle). When he's not peering through a microscope or messing with test tubes he can be found playing in some of the top jazz groups in the Seattle area.

Jazz Coalescence is a jazz sextet that Chris started around 2006. Its sound and groove has evolved from the post-bop edginess of the 1960's to a more nuanced feel that is reminiscent of the Pacific Northwest. This is reflected in the repertoire the group has chosen to play, much of which comes from the members themselves.