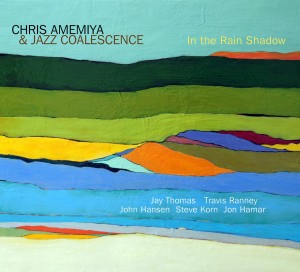 Starting out six years ago exploring the classic hard-bop jazz sextet repertoire, trombonist Amemiya's group evolved to one with a unified, distinctive, dynamic voice. All firmly rooted in Seattle's rich mainstream jazz scene, trumpeter Jay Thomas, saxophonist Travis Ranney, pianist John Hansen, bassist Jon Hamar and drummer Steve Korn bring a performing and compositional aesthetic that reflects their musical environs, adding to a cohesive group sound. Recorded in concert, "In the Shadow" captures the dynamics, intimacy, and impromptu character that can only be found from a live performance.

Reviews of In the Rain Shadow

Jazz Society of Oregon (George Fendel)
This all-Seattle group is dedicated to the bebop tradition and they explore it with great vigor and solid musicianship. Amemiya, a new name to me, has done his homework and finds his muse in the shadows of Curtis, J. J. and other revered bone bopsters. The name I know best in this quintet is Jay Thomas, a longtime standout Seattle cat who plays nea ...

In the Rain Shadow (Alex Shapiro Composer)
It makes complete sense that an evolutionary biologist would have a deep understanding of the genetics of musical groove. Trombonist Chris Amemiya has the rare gift of this holistic balance in his life, and with his accomplished co-conspirators of Jazz Coalescence, he lets all of us in on the secrets of making fabulous music In the Rain Shadow. The ...

In the Rain Shadow (Ian McDougall, Composer, Trombonist)
Recently I had the privilege to listen to Chis Amemiya's new CD, "In The Rain Shadow". It's a terrific album performed by a solid group of great jazz players who have come together to concertize and record one of their "Live" performances. I've always loved 'live' over 'studio' recordings because it's the 'Real' thing - especially in this day and a ...

In the Rain Shadow (Michael Davis, Founder/President - Hip-Bone Music, Inc.)
Jazz Coalescence's new release In The Rain Shadow gives the jazz-rich community of the Pacific Northwest something to hang its hat on and sink its teeth into. An abundantly solid release from top to bottom, Rain Shadow features a mix of spirited originals and solid jazz classics, beautifully crafted arrangements, dynamic solos and synergistic ensem ...

In the Rain Shadow (Sharman King, Vancouver Opera Orchestra)
Chris Amemiya is a true renaissance man. By day he's a research molecular biologist expanding our understanding of the evolution of change in vertebrates and stem cells, by night he's expanding our understanding of harmonic changes as a trombonist of the highest order. The way Chris gets around the trombone will leave trombone players shaking their ...

Midwest Record (Chris Spector)
Here’s a Seattle group that has been putting in their time and the pride in their work shows. Hard boppers that can dip their toe in mainstream jazz waters and make it all sound right, this crew knows how to stir it up into a fine concoction. With a smoking bone leading the way, this set gets going in high gear and never backs down from there. Wit ...

Cadence (Michael G. Nastos)
The Origin/OA2 labels consistently present solid mainstream bop oriented jazz, and this disc from trombonist Chris Amemiya - his first as a leader - certainly fills the bill. It’s an enjoyable program of melodic and for the most part hard swinging music sure to please listeners who like their jazz with few frills and surprises without being shockin ...

Jazz Scan (Ric Bang)
There's a Chris Amemiya who plays trombone, has performed with combos and big bands in Hawaii (his birth place), Boston and Seattle, and has formed the swinging sextet featured on this release. There's also a Chris Amemiya who completed his college undergraduate degree at Purdue University, obtained a PhD in genetics at Texas A&M, received an Alf ...