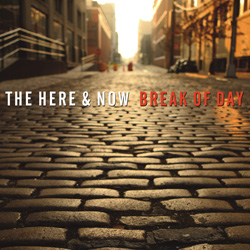 Here and Now quintet combines a number of elements... to form an excellent, cohesive debut album.
All Music Guide

The Here & Now's recording debut, Break of Day, is a fresh and delightful romp through melody and time. Drawing deeply from the rich tradition of jazz and pushing forward into other folkloric world musics, the quintet seamlessly weaves in and out of itself, exploring a multiplicity of meters while presenting delicious melodic treats. The band, Tatum Greenblatt on trumpet, Ben Roseth on saxophone and flute, pianist Drew Pierson, bassist David Dawda and Sean Hutchinson on drums, grew up and played together in Seattle, and are still together now, seizing the streets and sounds of New York City.

Reviews of Break of Day

All Music Guide (Adam Greenberg)
Built from Seattle's powerhouse high school jazz programs and refined in the East Coast conservatories, the Here and Now quintet combines a number of elements of their upbringing to form an excellent, cohesive debut album. From the high-end high school ensembles, the players appear to have picked up a sensitivity to the collective -- rather than sh ...

Jazz Review (Brian S. Lunde)
The Here & Now quintet's debut record, Break of Day, is a fine introduction to some young jazz musicians who began to build their sound during their high school years together in Seattle. But being serious musicians, they didn't settle for the jazz equivalent of a high school garage band; they first went their separate ways to pursue collegiate jaz ...

LEARN MORE ABOUT
The Here & Now