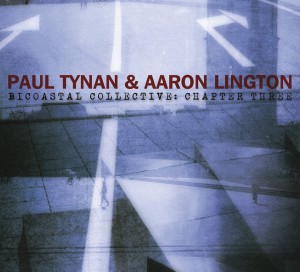 ...sparkling solos in a decidedly post-bop setting. The music throughout this enjoyable CD keeps revealing new facets with each hearing.
All About Jazz

Canadian trumpeter Paul Tynan and California-based baritone saxophonist Aaron Lington let out the stops for an unabashed blowing session on their third recording of the Bicoastal Collective series. Veering from the sweeping, conceptual suites on the former volumes, the duo combines with a powerful quartet of improvisors from across North America (thus "Bicoastal"!) for a set of dynamic and inspired originals. With guitarist Corey Christiansen, Dan Murphy on Rhodes, bassist Ashley Summers and drummer Jon Deitemyer, Chapter Three further defines this captivating musical partnership and piques the curiosity for what lies in future chapters.

The Jazz Word (John Barron)
Blazing unison lines open this high-energy collection of original quintet music. The razor-sharp focus of trumpeter Paul Tynan and baritone saxophonist Aaron Lington, both co-leaders and composers for the disc, is quickly revealed on the opening track "Folklike." The music for their third installment of the Bicoastal Collective may be far removed ...

Midwest Record (Chris Spector)
Here's a post bop set with it's own special sauce that's going to sneak up and catch you from behind. With a veneer that feels like a minimalist vibe, it's anything but. Turns out this is a sly, contemporary blowing date. Surrounding themselves with improvisers that don't normally play together but find the common ground to click here, this se ...

emusic.com (Dave Sumner)
Third recording for Paul Tynan and Aaron Lington’s Bicoastal Collective. In addition to Tynan’s trumpet and Lington’s bari sax, Dan Murphy is on Rhodes, Corey Christiansen on guitar, Ashley Summers on bass, and Jon Deitemyer on drums. More straight-ahead than prior recordings, this is more of a lay-back-and-play type of session. Freewheeling solos ...

!Earshot (Canada) (Jim Dupuis)
TOP TEN RECORDS OF 2014 Combine a hot trumpet, with a groovy organ, a racing bass and the bari sax and you get a fun CD with plenty of bop and blues. Trumpeter Tynan from Canada's east coast and bari sax player Lington from the US west cover all the bases in this very enjoyable CD. ...