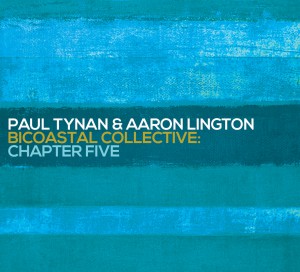 Individually or collectively, these are first-class musicians, and their expertise and rapport are explicitly manifest on every page of Chapter Four.
ALL ABOUT JAZZ

With the fifth album from their decade-long collaboration, the Nova Scotia-based trumpeter and Bay-Area baritone saxophonist are at their most ambitious. With eight new large ensemble compositions for a big band that includes friends and colleagues from their days at the University of North Texas, they further solidify a captivating musical partnership that restlessly pursues new vehicles for their compositions and musical visions.

Cadence (Robert Rusch)
The Bicoastal Collective led by PAUL TYNAN [tpt] and AARON LINGTON [bari] is very lively on their latest recording CHAPTER FIVE [OA2 Records 22143]. This is a well rehearsed 18 piece big band that is full of solid soloists. The program [65:24] comprises 8 originals (4 each from Lington and Tynan) and much of it originally written with members of th ...

Downbeat (J. Poet)
When the Bicoastal Collective launches into a tune, audience members soon get the sense that they're being pulled into a distinctive sonic space. The ensemble features five saxophones, four trumpets and four trombones, in addition to a rhythm section of guitar, bass, drums and piano. At this year's San Jose Jazz Summer Fest, the band played some of ...

CFBX - Canada (Jim Dupuis)
2017 TOP TEN RELEASES Here is another great, large ensemble/big band. The Canadian trumpeter Tynan and the American bari sax player Lington have another winner in their most recent chapter of this series. Both are important educators in their respective countries. BCC5 is a very eclectic mix of compositions and arrangements from big band funk to C ...

KUCI - Irvine, CA (Hobart Taylor)
Another large ensemble posing as a big band is this collaboration between baritone saxophonist Aaron Lington and trumpeter Paul Tynan. Playing tunes by one or the other, they join 12 other horn and woodwind artists, a piano and rhythm section in straight ahead excursions that amble off into realms of expanding consciousness. The baritone solo on ...