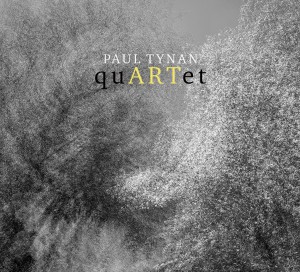 ...the sound runs a loose parallel to that of Polish trumpeter Tomasz Stanko's work with the Marcin Wasilewski Trio on ECM Records, with a bit more pep in its step...
ALL ABOUT JAZZ

Collaborating with some of his favorite visual artists, Nova Scotia-based trumpeter Paul Tynan requested pieces from each so he could create newly composed musical works inspired by their art. Having personal relationships with each artist and then spending such intimate time with their works, (qu)ART(et) ended up being a highly personal experience for Tynan, with his commitment spanning over a year and resulting in a limited-edition, hard-bound book and this recording package. Tynan has recorded five eclectic albums on OA2 with his musical partner, baritone saxophonist Aaron Lington, under the name Bicoastal Collective. From the mainstream "More Than Just a Single Road" to the more modern and angular "Swirl," or the open melancholy found in "What We've Left Behind," Tynan offers a more intimate look into his own musical persona while still expressing his strikingly collaborative artistic nature.

All compositions by Paul Tynan (SOCAN)

Midwest Record (Chris Spector)
Informed by punk, inspired by art, the trumpet ace has melded it all into a nifty whole in which he serves up post bop reflections on art pieces that are meaningful to him, and they are included in the album notes. Aside from the art aspect, Tynan remains a lyrical player that adds the grace to grace notes. With his hand picked crew properly in ...

All About Jazz (Dan McClenaghan)
4-STARS Trumpeter Paul Tynan's offering for 2019 is entitled quARTtet, emphasis on the capitalization of the embedded word "art." Jazz recordings have a long history of pairing up with the visual arts, especially in the realm of album and CD cover images: The paintings on Charles Mingus' Mingus Ah Um (Columbia, 1959); all of pianist Dave Brube ...

CD Hotlist (Rick Anderson)
The concept behind trumpeter and composer Paul Tynan's latest album as a leader is quite interesting: he commissioned artworks from six friends (one of them his wife), and used each piece as the inspiration for a jazz composition. But he didn't just take a melodic idea from each image; instead, his tunes are composed and arranged in intimate conver ...

Jazz Weekly (George W. Harris)
I've been listening to jazz for almost 50 years, and I still cannot honestly be positive if I'm listening to a trumpet, cornet or flugelhorn. Paul Tynan plays all three, and all three sound equally warm on ballads and strong on uptempo tunes, and for me to definitively say which is which on a song is simply conjecture. Nevertheless, the team of ...

Cadence (Robert Rusch)
As a painter, even beginning with my earliest work, I realized the effect composition and improvisation had on my canvas work. I would often pick some music to try to trigger/inspire my painting. PAUL TYNAN [tpt/flg/corn] has essentially turned the tables on that on quARTet [Origin Records 82776]. For this CD, Tynan has taken a piece of artwork (ca ...

Musik an sich (Germany) (Wolfgang Giese )
Today I introduce a record of a Canadian jazz musician, quartet of the trumpeter, flugelhorn and cornetist Paul Tynan. Yes, the word art (ART) is already in the title, and I can only underline it, because this music is great art! It should also be understood that one should consider this publication as a Gesamtkunstwerk. In addition to the four mus ...

Musik an sich (Germany) (Wolfgang Giese)
Today I introduce a record of a Canadian jazz musician, quartet of the trumpeter, flugelhorn and cornetist Paul Tynan . Yes, the word art (ART) is already in the title, and I can only underline it, because this music is great art! It should also be understood that one should consider this publication as a Gesamtkunstwerk. In addition to the four mu ...

Ottawa Citizen (Peter Hum)
Antigonish-based trumpeter Paul Tynan's latest album wastes no time in getting down to hard-swinging business. After a few pickup bars, Tynan's composition More Than Just A Single Road treats listeners to authoritative post-bop that recalls the early '80s music of Wynton Marsalis thanks to some of its harmonic and structural details. Tynan's lea ...