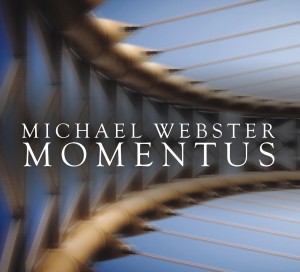 New York-based saxophonist and composer Michael Webster presents a collection of nine original compositions featuring trumpeter Ingrid Jensen and vibist Chris Dingman, along with some of the leading NYC jazz musicians of his generation. Working with all the textural and orchestrational options his sextet allows, Webster stretches the possibilities of form while never losing his focus on the strength and clarity of the melodies.

emusic Review (Dave Sumner)
An album that surges forward at near imperceptible speed until it suddenly overtakes the ear. Tenor saxophonist Webster leads a sextet that includes past Jazz Picks Chris Dingman on vibes and Ingrid Jensen on trumpet/flugel. Modern jazz tunes with an ambient personality. Some tracks definitely burn, like on “Train Song,” with guitarist Jesse Lewis’ ...

The Jazz Word (John Barron)
Michael Webster succeeds at creating vivid imagery through the development of candid themes and unambiguous grooves. There's much more to this New York-based tenor saxophonist than the predictable collage of instrumentalist who also writes tunes. Composition seems to be the impetus for Webster's musical output. Momentus, his second release as ...

Midwest Record (Chris Spector)
The post ECM cool school vibe is alive and well in Brooklyn in the hands of Webster, Ingrid Jensen, Ike Sturm and the rest of the kids that are coming up and marking their paths. Call him Paul Winter's wayward progeny that veered off into ethnomusicology on Mars if you will but Webster is creating a new standard that others will turn into cliché. ...

Bird Is The Worm Jazz Blog (Dave Sumner)
This is an album that creeps up on the ear, and like a ocean tide slowly overtaking the shore, before one knows it, the music has completely immersed the listener. For Momentus, Michael Webster has assembled a strong group to perform his original compositions, and the choice of personnel pays off big time. For this is something of an alternate re ...