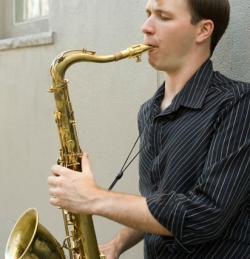 Tenor Saxophonist and composer Michael Webster manages to reside comfortably in the crease of New-York-style instrumental improvisational music while maintaining an eclecticism and sincerity all his own. The same can be said of Webster as of his contemporaries Dave Douglas and Vijay Iyer - that he is not merely a musician but a facilitator of musical collaborations in whole greater than the sum of their parts and that he truly plays not only the horn, but the band.

A native of Ottawa, Canada, and son of a University of Ottawa music professor and a National Arts Centre Orchestra of Canada violist, Webster releases his second solo album, Momentus, this year. His first, Leading Lines, received round praise for its sophisticated take on accessible material. Webster is known for his love of Afro- Latin music and extensive collaborations with some of its most luminary exponents, including William Cepeda, Arturo O'Farrill, and John Benitez, and the influence is audible in Leading Lines. Momentus exhibits elements of Webster's trademark style, but is notably different, building upon the artist's experience in the intervening years.

Momentus is notable as a departure from the genre-based music of Leading Lines, into stream-of-consciousness storytelling and ambitious long-form explorations. Webster plays nimbly with the textural and orchestrational options his unconventional six-piece ensemble allows, featuring Ingrid Jensen's trumpet and Chris Dingman's vibes, and stretches the possibilities of form. What will likely endear this album to casual listeners and critics alike, though, is the strength and clarity of its thematic material. Central to Webster's work, and lending it a universality and catharsis transcendent of its instrumental setting, is the feeling that the tune has absolute primacy.

Webster lives in Brooklyn, New York, and continues to compose, perform and tour with both his own groups and as a sideman.