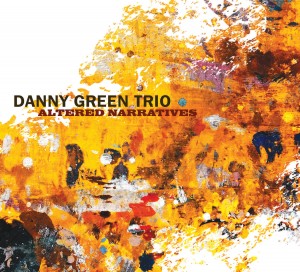 ...one of the most engaging jazz recordings, or any type of recording for that matter, that I've heard in recent years.
San Diego Troubadour

Danny Green reaches new creative heights on this, his fourth recording as a leader (second for OA2 Records). Recorded over several days at New York's famed Sear Sound with master producer Matt Pierson, Danny brings together his five year-old trio, along with a string quartet, to interpret eleven new highly personal compositions, each shaped by elements of his life's narrative - feelings of warmth or nostalgia, the experience of a harried moment, or simply the convergence of a time and a place.

"The Danny Green Trio continues to show exponential growth and Green is a talent that is as technically gifted as he is artistically brilliant." - Bop-N-Jazz

All About Jazz (Dan McClenaghan)
4 1/2 STARS Pianist Danny Green took a big step up in the piano trio rankings with 2014's After The Calm (OA2 Records). The San Diego-based group focused in on a distinctive and beautiful set of Green originals and recorded them with a continuity of mood and an ebullient brio - like three guys who knew what they were doing in an art that demands ...

Love London Love Culture (Editor)
On this fourth album from Danny Green, the music is lighthearted and playful throughout adding a glimmer of sunshine to the listener's life. This album is not simply a celebration of jazz music but also music of the classical genre, which delicately flows through all of the songs on the record. Danny Green, Justin Grinnell and Julien Cantelm have ...

Midwest Review (Chris Spector)
Everything here seems appropriate. Recorded for Origin's ‘after hours' label with production vet Matt Pierson at the helm, this jazz piano trio date seems like the perfect after hours set. Recorded with that after hours, there's no one in the studio but us, vibe this is the perfect classic feeling date that simply has to dust on it. A killer l ...

All About Jazz (Mark Corroto)
The old adage, that you know you're a jazz musician when you realize that there are actually two 9 o'clocks in a day, has been replaced with the revelation that jazz is a musical omnivore. It can consume every style of music from classical to pop as sustenance for a performance. Pianist Danny Green's proves that argument with his trio recording ...

CD Hotlist (Rick Anderson)
On his fourth release as a leader, pianist Danny Green does something highly unusual and impressive: he gives us an album that consists entirely of what is, in every discernible way, straight-ahead piano-trio jazz, with no wild harmonic or structural experimentation, but which nevertheless sounds entirely personal and original. It's really kind of ...

Dusted Magazine (Justin Cober-Lake)
If the opening of the Danny Green Trio's new album nods to Bill Evans and reflects the way that tradition carries a strong role in pianist Green's compositions and playing, the title Altered Narratives suggests that there's more going on here than just a new entry in the trad jazz storyline. Any gamesmanship in the album comes across less as a ...

Musical Memoirs (Dee Dee McNeil)
This album features the compositions of Danny Green as well as his skills on the piano. I found his compositions to be interesting, melodic and memorable. I especially liked track #1 with its heavy blues influence, reminding me a lot of the "Killer Joe" song. I was all set for more. Then came track #2, "The Merge" which was totally different and pl ...

San Diego Troubadour (Paul Hormick)
Danny Green has established himself as one of the best jazz pianists and composers in Southern California. His second CD with his trio, Altered Narratives, displays the individual talents of Green, bassist Justin Grinnell, and drummer Julien Cantelm as well as what this unit has evolved into since the band's inception five years ago. The trio's ...

The Jazz Owl (Travis Rogers, Jr.)
Altered Narratives is Danny Green's fourth album, his second on the OA2 label (OA2 22128). His exemplary trio (Justin Grinnell on bass and Julien Cantelm on drums) have explored Brazilian themes and have captivated the West Coast Jazz scene with their tight, albeit lyrical, expressions. Danny Green composed all of the tracks for Altered Narrativ ...

Jazz Weekly (George W. Harris)
Pianist Danny Green's trio has been a solid team, backing up artists such as vocalist Roberta Donnay. Here, Green shows his composing and arranging skills match his tactile talents with Justin Grinnell/b and Julien Cantelm/dr as his pieces such as "Serious Fun" and "October Ballad" show a range from Crescent City stomps to late night candelabra. Ca ...

Bird is the Worm (Dave Sumner)
Unapologetically cheerful and light, this trio set from pianist Danny Green, bassist Justin Grinnell and drummer Julien Cantelm offers up a pop music style of jazz that beams a wide smile that means it. Intriguingly, planted smack dab in the center of the recording are three pieces that bring in a string quartet. The shift in sound is very much p ...

Downbeat Magazine (Kirk Silsbee)
Double bills haven't been part of the Los Angeles jazz landscape for long. The complimentary booking of pianists Danny Green and Josh Nelson and their bands may not have been sufficient to draw comparison to the era when Billie Holiday and her trio alternated sets with the Red Norvo Band at Billy Berg's, but it was certainly an inspired pairing. Th ...