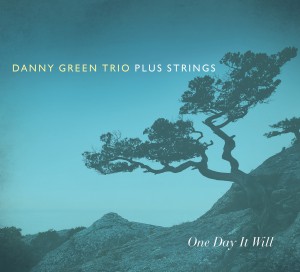 ...a writer of gorgeous and engaging tunes, and a first rate pianist leading a distinctively interactive trio.
All About Jazz

Inspired by the experience of adding a string quartet to his trio for several compositions on his "Altered Narratives" recording, pianist Danny Green devoted himself to creating a body of work for his expanded ensemble. With a vivid blend of jazz, classical, and Brazilian elements in his composing already, the added textural possibilities allow Green to further explore orchestration and the blurring of genre and musical influence for surprising and satisfying results. "Green's eloquent eclecticism - a gift that includes writing anything from celebratory blues to meditative reflections to composing for a string quartet - illuminates his sparkling new release..." - WNPR

Reviews of One Day It Will

All About Jazz (Dan McClenaghan)
4 1/2-STARS Charlie Parker, alto saxophonist/bebop pioneer, got the ball rolling on the adding of strings to jazz. This went down in the late 1947 through 1950, on a pair of releases on Mercury Records introducing the sound of the Yardbird backed by a symphony orchestra. These sets were later compiled by Verve Records and issued in 1995 as Charlie ...

Rifftides (Doug Ramsey)
Pianist Green's earlier album Altered Narratives put strings with his trio on three tracks. The melding with a string quartet worked nicely. One Day It Will carries the idea to album length, with excellent arrangements by Green and smooth interaction among a string quartet and the trio featuring bassist Justin Grinnell and drummer Julien Cantelm. A ...

Jazz Weekly (George W. Harris)
RINGER OF THE WEEK Pianists seem to always dream about doing a trio album with strings. Well, Danny Green makes a dream come true, as he wisely avoids the use of the string quartet for "support," but makes the team of Kaet Hatmaker/v, Igor Pandurski/v, Travis Maril/vi and Erica Erenyi/cel an intrinsic part of the collaboration. Green's got a g ...

San Diego City Beat ( Jeff Terich)
One of the remarkable things about jazz is how elegant it can sound at its most minimalist. When Duke Ellington, Max Roach and Charles Mingus created the legendary Money Jungle in 1963, they made magic with nothing more than piano, bass and drums. And in 2016, pianist Vijay Iyer and trumpeter Wadada Leo Smith created a sparse yet breathtaking set o ...

VinylMine (Greece) (PHONTAS TRUSSAS )
Pianist Danny Green's relationship with strings began on his 2016 release, "Altered Narratives", which we had written about here. In that album, Green had used strings in three tracks. Now on "One Day It Will", that relationship expands, acquiring more permanent or rather permanent features. Danny Green is a pianist strongly influenced by Bill ...

Musical Memoirs Blog (Dee Dee McNeil)
San Diego pianist and composer, Danny Green, has arranged a unique group of original songs, expanding his composition and arranging skills by adding a string quartet to his most recent production. The first tune, "Time Lapse to Fall," is rich with classical overtones. The next cut, "As the Parrot Flies" is lush with strings and uses a pizzicato tec ...

New York City Jazz Record (Robert Bush)
Southern California piano virtuoso Danny Green has really come into his own lately, shedding some obvious debt to Chick Corea and, most importantly, learning how to infuse a sense of space into his music. This new maturity culminates with the release of his latest disc, a marriage between his remarkably simpatico trio of bassist Justin Grinnell an ...

KUCI - Irvine, CA (Hobart Taylor)
Engaging and fulfilling is the lush work of San Diego composer and pianist Danny Green. Green is a melodist, one of those folks who creates tunes that are at once completely new and yet deeply and intimately familiar. Musicians like that astound me. It's as if someone took a rock and some leaves and and pond water mixed them together and came up wi ...

The Jazz Page (Editor)
On One Day It Will , pianist, composer and leader Danny Green joins his trio of bassist Justin Grinnell and drummer Julien Cantelm with a string section for a stunningly beautiful recording. Green's touch on the keys is fantastic, and the songs, all original works, are melodically and emotionally engaging. The musicianship from all the players on t ...

JazzdaGama (Raul da Gama)
Danny Green is one of those pianists who would have made Debussy proud. This isn't because he is the kind musician who is ideally suited to play Debussy or because this album, One Day It Will features his now-iconic trio with strings. But when Danny Green plays the piano you forget that the instrument has hammers. He has that kind of delicate, almo ...

CD Hotlist (Rick Anderson)
I've become a passionate fan of pianist and composer Danny Green, whose trio albums have been among my favorite jazz releases of the last five years or so. On his latest, he combines his trio with a string quartet to brilliant effect. This is not actually his first foray into the trio-plus-quartet format–several tracks on the group's last album, ...

El Debate de Hoy (FERNANDO BONETE VIZCAINO)
With One Day It Will , the composer and pianist Danny Green continues, successfully, his progressive exploration of new forms of fusion between jazz and classical music incorporating a string quartet to his group. Examined with the perspective that the years allow, the musical career of Danny Green offers the listener a logical and progressive e ...

BeBop Spoken Here (Dave Brownlow)
San Diego based pianist/composer Danny Green, with his fifth album, leads his Trio and a String Quartet from the San Diego Symphony Orchestra through an attractive programme of original chamber jazz. At times, the strings provide background figures and harmonies much as a conventional sax section might do in a jazz orchestra and, at others, interje ...

All About Jazz (Doug Hall)
LIVE REVIEW Acclaimed San Diego pianist and composer Danny Green and his trio, Justin Grinnell and Julien Cantelm performed a set supporting their CD release One Day It Will (2018), at the Lily Pad in Cambridge, Ma. Sat June 16th. The intimate setting of this small venue in the heart of a Cambridge neighborhood offered the perfect setting for the ...

All About Jazz (Dan Bilawsky)
While Long Island's Huntington Summer Arts Festival doesn't hold status as a jazz feast per se, the music most certainly plays a significant role on its calendar. The not-so-distant past has seen everybody from drummer Roy Haynes to pianist Vijay Iyer to vocalist Jane Monheit grace the Chapin Rainbow Stage, and the lineup for 2018 had more than its ...

The Jazz Owl (Travis Rogers, Jr.)
And just when I thought Danny Green's Trio had outdone themselves with 2015's Altered Narratives, they release One Day It Will, their third album on OA2 Records. It is the very same brilliant trio of Danny Green on piano, Justin Grinnell on bass, and Julien Cantelm on drums. In fact, they have been together since 2010. The continue what had sta ...

All About Jazz (Doug Collette)
In a practical execution of the action foreshadowed in its title, restrained use of orchestration on One Day It Will makes this album work. Hardly awash in strings, the pianist and his trio's pithy musicianship is instead accentuated with its lush surroundings, so much so that, while their improvisations might sound hemmed in, the lavish arrangemen ...

Bird is the Worm (Dave Sumner)
Album of the Day - What I like about it: What's not to like about a lovely piano trio with strings recording? I like how Danny Green situates the piano trio and strings as if two birds in flight, each spurring the other to greater heights, and so close to one another that the motion is a blur of wings. I like that there's a depth to the harmonie ...