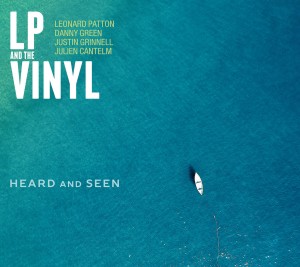 From tight arrangements to free-wheeling improvisations, this telepathic trio evolves into an equally intercommunicating quartet with Leonard Patton. If there is a group worthy of special attention and reintroduction in Jazz, it is LP and the Vinyl.
Travis Rogers Jr., The Jazz Owl

Along with renowned jazz, blues and gospel singer Leonard Patton, the critically acclaimed San Diego-based Danny Green Trio take on the moniker LP and the Vinyl to explore and reimagine the songs of pop greats, jazz standards and their own originals. Songs like David Bowie's "Life on Mars," The Beatles' "Fool on the Hill," and Oasis' "Wonderwall," take on new life with captivating arrangements and free-flowing improvisation, while "Softly, As In A Morning Sunrise" and "My One And Only Love" receive modern rhythmic updates. Green offers his own "The Lonely Band" - with lyrics by Patton, and "Night Waltz," contributing the newest works to this collection covering nearly 100 years of American popular song. With Patton's infectious charisma, the extraordinary interplay between Green, bassist Justin Grinnell, and drummer Julien Cantelm, and the band's search for new routes through known music, LP and the Vinyl's riveting appeal makes Heard and Seen a compelling and fun listen.

LP and the Vinyl is:

Reviews of Heard and Seen

CD Hotlist (Rick Anderson)
Rick's Pick The band here operating under the name LP and the Vinyl is actually the Danny Green Trio (whose praises I've sung here in CD HotList on multiple occasions), with the addition of singer Leonard Patton. Their debut album as a quartet is anything but a typical vocal jazz outing; while there are some standards ("Softly, As a Morning Sunri ...

Midwest Record (Chris Spector)
The Danny Green Trio adds a blues singer and takes on a new identity as they carouse through 100 years of pop music, including a few ringers of their own, on this set that rolls things around in their own seasoned flour to make it all modern and now, but in a cool way. With an easy rolling sound that's at home in an after work hang out, this is fu ...

All About Jazz (Dan McClenaghan)
4 1/2 STARS Vocalist Leonard Patton can be heard and seen often in the San Diego County, California area, making his joyful noise. Often, he appears in the company of the Danny Green Trio, one of the jazz world's premier piano trios. The live shows are exhilarating affairs, with Patton—covering everything from Stevie Wonder to Michael Jackson to ...

Tracce di Jazz Magazine (Italy) (Andrea Baroni)
Extensive and recurrent is the diatribe between jazz lovers who can't stand listening to the beloved idiom used for translations from pop and song, and those who prefer the new guise of the known classics, appreciating just enough improvisations and impromptu inventions, as long as premise or continuation of the theme cantabile and sung. A separati ...

Jazz Convention (Italy) (Fabio Ciminiera)
The name of the formation and the choice of the songs bring to mind the afternoons spent around the stereo listening to records with friends, alternating musical genres and preferences, classics and novelties, without a predetermined order if not to look at the covers of the thirty-three laps and pass the various vinyls on the plate. Heard and S ...

Jazz Weekly (George W. Harris)
Pianist Danny Green has done creative things in trio settings, and this one with vocalist Leonard Patton takes the next journey forward. His team of bassist Justin Grinnell and drummer Julien Cantelm create ripples on a slowly undulating opus with Patton on "Softly, As In A Morning Sunrise" with Patton supplying wanderlust with the flowing trio dur ...

San Diego Troubadour (Frank Kocher)
Jazz lovers are in for a treat: the Danny Green Trio is established as a solid presence in the San Diego area jazz scene, with five CD releases and well-earned international recognition. Leonard Patton likewise has a considerable cachet as an expressive jazz, gospel, and blues singer, with several of his own solo recordings, and has been heard with ...

LEARN MORE ABOUT
LP and the Vinyl