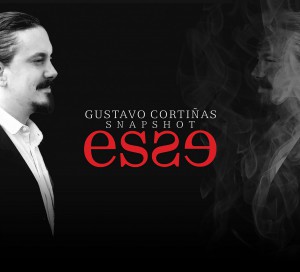 Fusing two of his loves - music and philosophy - drummer Gustavo Cortiñas gathers fellow musicians from his adopted home of Chicago to contemplate, through composition and improvisation, the relationship between essence and being. Inspired by the ongoing dialogue of some of the most brilliant minds in western philosophy, Gustavo composed music to illustrate their concepts of 'being' and the effect those thoughts had on the formation of metaphysical, ethical, and moral theories. Born and raised in Mexico City, Cortiñas graduated with honors from New Orleans' Loyola University and moved to Chicago in 2011 to pursue his Masters at Northwestern University.

"A Smörgåsbord of the moods and nuances that make up the human experience... intrinsically fusing the personal to the universal..." - Jazziz Magazine

Midwest Record (Chris Spector)
The drummer from Mexico finds a bunch of simpatico players in Chicago while working on his masters at Northwestern and they turn in music that more than just a bunch of notes. With the forward kind of thinking that tempts you to label him as Tito Puente III, you can dance, you can listen and you can enjoy this thoroughly throughout. Soulful enou ...

Chicago Reader (Peter Margasak)
I know Chicago has a very deep jazz scene, but I'm often reminded how strong it is by a record like Esse (OA2), the second from drummer and composer Gustavo Cortiñas. Though the Mexico native moved to the area a decade ago to further his education, attending Loyola and Northwestern, I'd never heard of him until a couple of months ago (same goes fo ...

Couleurs Jazz (France) (Gaby Sanchez)
Gustavo Cortiñas, Mexican drummer and composer, living in Chicago, thinks and therefore is… Inspired by the philosophers from Plato to Hegel, from Aristotle to Descartes, or even Nietzsche, his jazz has the nuances and Couleurs of Mexico, Latin America: melodies, harmony, and also the Chicago swing. In any case a positive music and philosophy, j ...

WDCB - Chicago (Paul Abella)
Finally, how about some excellent local jazz from drummer Gustavo Cortiñas and his group Snapshot, who have just released the disc Esse, a tribute to Philosophy and the philosophers who have philosophized. This is a really wonderful disc, filled with some young heavy hitters from Chicago's jazz scene, namely Roy McGrath (tenor sax), Justin Copela ...

KZSU (Stanford Radio) (Tom McCarter)
Terrific drummer leads a talented sextet with alternating sax players added. The music covers a wide range and has a Latin tinge but is not what I would call Latin jazz. Mr. Cortinas does a nice job showcasing his fellow musicians with plenty of room to work out. All originals. ...

All About Jazz (Dan Bilawsky)
Gustavo Cortinas' Esse is a place where two passions meet and merge. The drummer's fascination with philosophy served as grist for the compositional mill, inspiring and guiding his hands and mind to create this deep-thinking treatise. It's a fascinating musical realization, exploration, and distillation of the works of Hegel, Aristotle, Descartes, ...

Jazz Weekly (George W. Harris)
Drummer and composer Gustavo Cortinas takes you on a musical journey through various philosophers and philosophies ranging from Descartes to Hegel and Aristotle. You don't have to be a master of dialecticism or existentialism to appreciate the songs, however, as there are no lyrics or lectures during the 11 pieces. Instead, Cortinas along with Just ...

DownBeat (Jeff Potter)
4-STARS Drummer/composer Gustavo Cortiñas' second disc as a leader intends to unite his dual passions of music and philosophy. The music, he explains, was "inspired by prominent figures in the history of Western philosophy," and his 11 compositions were meant to "illustrate their concepts of being." That could potentially be a red flag for an in ...

Contratiempo Jazz (Mexico) (Luis Jesús Galindo Cáceres)
Translated from Spanish: Mexican jazz has a side that associates with the territory, Mexico, another that relates to the origin of the musician, the Mexican jazz. Between the two lines of construction of a possible concept the relationships are multiple, there are musicians born in other countries who work and develop their projects in Mexico, ther ...

Bird is the Worm (Dave Sumner)
The newest from Gustavo Cortiñas engages in a thrilling sleight of hand. The drummer leads out with melodies that are crisp and clear as a cloudless Summer afternoon, not to mention pretty damn catchy, to boot. But then his septet obscures the view, solos up a storm of distractions and details and fireworks, and while it all flows naturally from ...

Modern Drummer (Greg David)
An emerging drummer to watch combines his passions for music and philosophy. Rhythm freaks may salivate over the complexities here, including polyrhythms of five against four and three, left-foot clave in five, and a ballad in 15/8. But that's not the point. The selections on Esse ("the act of being") are inspired by the work of key Western phil ...