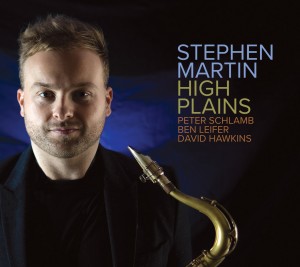 Stephen Martin may be fond of a specific jazz segment from the past, but he knows how to frame it in the right way and immediately gives it a contemporary twist. He does that completely in the vein of Mark Turner and Chris Potter. A powerful and especially promising debut full of auditory fireworks.
Georges Tonla Briquet, Jazz'halo, Belgium

Full of inspired, fiery conviction, saxophonist Stephen Martin channels the Kansas City jazz ecosystem that nurtured his professional and musical development on High Plains, his second album as a leader. Teaming with the virtuosic vibraphonist/pianist Peter Schlamb, bassist Ben Leifer and drummer David Hawkins, Martin tears through the Coltrane-inspired original, "The Void," and Frank Foster's "Simone," while Joe Henderson's "Punjab" lopes and swings conversationally. The classic "Easy Living" delivers a ballad's restraint while seeming ready to unfold and burst at any moment. With two of his mentors close at hand - saxophonists Bobby Watson & Matt Otto as featured soloists, with Otto also producing the session - the atmosphere is loose, rollicking and familial, reflecting the shared sense of dialect, rhythm and purpose.

All About Jazz (Jack Bowers)
Every so often, Missouri-bred saxophonist Stephen Martin bears witness to his main man, the late John Coltrane. But, for the most part, he is his own man on his second album as a leader, blowing hot, cool and earnestly on the quartet date, High Plains. Martin's disposition is decidedly contemporary, as he shows whether playing alone or with his spe ...

Kansas City Magazine (Nina Cherry)
Eight years after he recorded it, Stephen Martin feels like he's outgrown his first album. "You spend so much time trying to get not only your individual sound but the band sound together," Martin says. "And then you walk into a studio. If you're new to it, it's a whole new world to try and figure out. It was a big learning experience for me." ...

Kansas City JAM Magazine (Kevin Rabas)
Stephen Martin has a killer new album, "High Plains." KC saxophonist, bandleader, and educator Martin spoke with JAM, revealing his influences, sound, and path as a musician as well as, for him, what comes next. Martin spoke about the need to create, even during a pandemic, and the abundance of creative projects coming out right now, including his ...

Jazz Weekly (George W Harris)
Tenor saxist Stephen Martin brings a strong mid period John Coltrane to the table with his modal team of Peter Schlamb/vib-p, Ben Leifer/b, David Hawkins/dr and a couple cameo guests on this collection of mostly originals. Martin's tone is rich with a glorious vibrato, getting assertive on "Horizons" and riding over Schlamb's Tyneresque chords on ...

Jazz'halo (Belgium) (Georges Tonla Briquet)
With 'High Plains' the young American saxophonist Stephen Martin confirms all the qualities of his strong debut 'Vision' (2018), albeit surrounded by a completely new trio. The title of the opening track ('Horizons') is perfectly illustrated by Martin and pianist Peter Schlamb . Together they thoughtfully draw out the contours of the decor, thou ...

Take Effect (Tom Haugen)
The saxophone extraordinaire Stephen Martin returns with his sophomore album as leader, and he's got Peter Schlamb (vibraphone, piano), Ben Leifer (basses) and David Hawkins (drums) along with him for the loose but also very focused 8 tracks of timeless jazz sounds. "Horizons" opens the listen with a dreamy blur of quick keys, soulful brass and ...