...a quintet that could take its place on any stage in the land.
- DOWNBEAT

When pianist/composer Richard Sussman?s extraordinary debut album Free Fall was first released over 30 years ago, it quickly became a classic. The reunion of this incredible band, consisting of renowned trumpeter Tom Harrell, saxophonist Jerry Bergonzi, bassist Mike Richmond, drummer Jeff Williams, and pianist Richard Sussman, is captured here in a rare and exciting performance from 2003, live at Sweet Rhythm in New York City. Besides some of Sussman's tunes from the original Free Fall recording, the band also explores several new originals as well as a few standards that showcase the spectacular talents of soloists Tom Harrell & Jerry Bergonzi.

Reviews of Live at Sweet Rhythm

Cadence Magazine (David Franklin)
Thirty-one years ago, pianist-composer Richard Sussman released an LP that became something of an underground Post-Bop classic. To celebrate Free Fall's CD release in 2003 Sussman reconstituted most of the original group (saxist Larry Schneider didn't make it) for a two-night gig at New York's Sweet Rhythm. Although between the 1979 recording a ...

All Music Guide (Ken Dryden)
Pianist Richard Sussman led a quintet in the late 1970s and made one record (Free Fall) for Inner City, though after going to Europe for a time, he was unable to land another record deal as a leader. After years of working in a supporting role by touring with various pop and rock acts, along with the occasional jazz gig and teaching at the Manhatta ...

100 Words On... (C. Michael Bailey)
Pianist Richard Sussman's 1979 quintet recording Free Fall made quite a splash when re-issued in 2002. Sporting trumpeter Tom Harrell and saxophonist Jerry Bergonzi, the disc was a hard bop celebration. Break forward 30 years, this same band unites for a live recording at NYC's Sweet Rhythm in 2003 playing a couple of pieces from the earlier rec ...

Oregon Jazz Scene (Kyle O'Brien)
Pianist and composer Sussman has gotten the band back together. The band here is called the Free Fall Reunion Band. "Free Fall" was the 1978 album that the group recorded together, which reviewed well in Down Beat. The members of the group went their separate ways, including Sussman, who became both a synth and piano sideman and also an educator at ...

Amazon.com (Grady Harp)
This CD was recorded live on June 20 and 21, 2003 at Sweet Rhythm in New York City. It is a celebration in every sense of the word. Famed jazz pianist Richard Sussman gathered his old group together from a period in 1978 when the Richard Sussman Quintet gained popularity and a vast following. After twenty-five years he re-assembled the same players ...

JazzTimes (Thomas Conrad)
Much of the jazz art form in contained in obscure artifacts preserved, against all odds, from the clutches of oblivion. That is the story behind this album, well told in Neil Tesser's liner notes. It goes something like this: In 1978, pianist-composer Richard Sussman made an LP called 'Free Fall' on Inner City. It had an afterlife as a kind of u ...

Audiophile Audition (Doug Simpson)
Usually magical moments only occur once. But sometimes, with luck, magic strikes twice. That's the glory of Live at Sweet Rhythm, which features the Richard Sussman Quintet, also known as the Free Fall Reunion Band. First a bit of history to set the proper perspective: back in 1978 pianist Sussman was part of the New York City jazz scene and pla ...

All About Jazz (Dan Bilawsky)
Life has few certainties, but the constant and ever-moving nature of time is one of them. Events, both miniscule and monumental, pass by and usually leave nothing more than a memory or, in the case of music, a record. Such was the case with pianist Richard Sussman's Free Fall (Inner City Records, 1978). Joined by some burgeoning young talent in 197 ...

All About Jazz (Larry Taylor)
In 1979, pianist Richard Sussman's recording Free Fall was released on Inner City to some acclaim. Now, over three decades later, Sussman brings back his band mates from the seventies to perform on Live at Sweet Rhythm. Chief among them is trumpeter Tom Harrell, who gives further evidence that he is a genius of improvisation. Besides Harrell, Jerr ...

JazzChicago.net (Brad Walseth)
Pianist Sussman was a young player on the NYC loft scene back in the late '70s when he gathered a few of his friends together and made a record. The result was Free Fall, a record that received critical acclaim, but without the financial reward to enable Sussman to keep the band together. The keyboard player ended up teaching at the Manhattan Schoo ...

Cadence (David Franklin)
Thirty-one years ago, pianist-composer Richard Sussman released an LP (2/79, p. 54) that became something of an underground Post-Bop classic. To celebrate Free Fall's CD release in 2003, Sussman reconstituted most of the original group (saxist Larry Schneider didn't make it) for a two-night gig at New York's Sweet Rhythm. Although between the ...

Jazziz (Ross Boissoneau)
Listeners can often discern the leader in a recoding date from the first few notes. That's not the case with the Richard Sussman Quintet's Live at Sweet Rhythm. On the opening track, "Waiting," the full band jumps in with both feet. Trumpeter Tom Harrell and saxophonist Jerry Bergonzi ride freely atop the fiesty rhythms laid down by pianist Suss ... 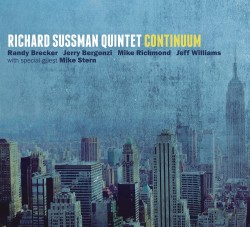