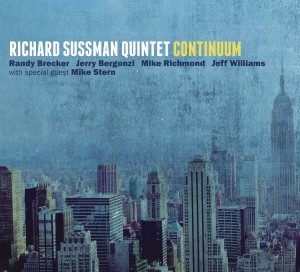 Given the stature of the performers, it comes as no surprise that the playing is magnificent.
-Cadence

Reassembling the stellar quintet from his classic 1978 recording "Free Fall" and his 2010 Origin release "Live At Sweet Rhythm," pianist and composer Richard Sussman honors the unique musical chemistry of the group with a new program of mostly original compositions along with classics, "Alone Together" and "Theme for Ernie." With the exception of trumpeter Randy Brecker replacing Tom Harrell in the line-up, Sussman returns with saxophonist Jerry Bergonzi, bassist Mike Richmond and drummer Jeff Williams, along with an appearance by special guest, guitarist Mike Stern. "...an undeniable synergy, which explains the lasting appeal of their sole studio recording." Jazziz.

Urban Flux (Rob Young)
Known for his proficiency as a musician, Richard Sussman is revered among his peers as an accomplished pianist, composer and arranger. On this occasion, he arrives with ?CONTINUUM? his latest album on Origin Records. It?s evident from the onset, Sussman produce a tempting dish extracted from the womb of traditional jazz yet he skillfully unwinds th ...

Jazz Society of Oregon (George Fendel)
When CDs contain mostly or exclusively original music, I look for one primary characteristic. If I can't find it, the CD is usually not a prime candidate for review. It's as simple as...a well-defined melody. If that's old-fashioned, so be it. But I lose my sense of direction when I can't discern a melody as a foundation for the improvisation which ...

Oregon Jazz Scene (George Fendel)
When CDs contain mostly or exclusively original music, I look for one primary characteristic. If I can?t find it, the CD is usually not a prime candidate for review. It?s as simple as ? a well-defined melody. If that?s old-fashioned, so be it. But I lose my sense of direction when I can?t discern a melody as a foundation for the improvisation which ...

Audiophile Audition (Doug Simpson)
Richard Sussman is not a well-known jazz musician, but perhaps that is because he has issued only three albums as a leader since his 1978 debut, Free Fall. The others include his 2010 release, Live at Sweet Rhythm, and this year's Continuum. Sussman may not be a household name, but he has had important roles in the jazz community as a composer (he ...

Seattle Post-Intelligencer (Jack Goodstein)
For those of us unfamiliar with Richard Sussman, a glance at his website gives an insight into his background, but even a cursory listen to the Richard Sussman Quintet's Continuum, his recently released album on Origin, gives an even better indication of his artistry. A pianist and a professor of composition at the Manhattan School of Music in New ...

All About Jazz (David Orthmann)
Unlike the performance of certain forms of popular music, in which musicians dutifully strive to reproduce perfect versions of tracks from a record, a jazz CD release party proceeds from entirely different expectations. Befitting the music's emphasis on improvisation and the element of surprise, a live set of previously recorded compositions serve ...

Jazzflits- Netherlands (Hessel Fluitman)
Take the album 'Continuum' by pianist Richard Sussman. He asked trumpeter Randy Brecker to play in his Quintet. And guitarist Mike Stern participates in 'Mike's Blues.' With which names you expect brute force jazz or explosive work, but the music is regulated. There is intelligent and it's nicely played. Band Leader Richard Sussman, in additi ...

New York City Jazz Record (Terry Holmes)
As the title suggests, Richard Sussman?s album is a study in endurance. By reuniting with some of the players who appeared on his 1978 debut Free Fall and presenting a diverse roster of new tunes, Sussman underscores how true musicality is never diminished by the passage of time. In other words, the ol? fellas still have it. Tenor man Jerry Berg ...