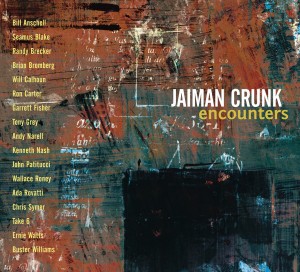 A cinematic kind of recording (that) demands your undivided attention. A winner throughout.
Chris Spector, Midwest Record

With a vast line-up of some of the greatest names in jazz performing a diverse and ambitious set of original compositions, composer and guitarist Jaiman Crunk presents an auspicious debut recording. Tied together by Crunk's compositions, his choice to have, for instance, multiple bass players - including Ron Carter, John Patitucci, and Buster Williams - had less to do with star power and solo voices, but more how they would shape each piece they performed on. Even with the brilliant and distinctive voices of Randy Brecker, Ernie Watts, Wallace Roney, Andy Narell, Take 6, and musicians from the Seattle Symphony, Crunk has managed to weave them seamlessly into what is ultimately, a very personal statement.

Urban Flux (Rob Young)
I?m pleased to share with you a new artist named Jaiman Crunk. He?s a guitarist/composer who emerges on the music scene with the blossoming fruits of his latest endeavor simply titled ?ENCOUNTERS? his debt on Origin Records. ?Encounters? is subsequently a fine collection of eight palpable songs quilted with diverse blend of resonating tones, mel ...

Midwest Record (Chris Spector)
Reminiscent of the kind of grand sitting down jazz date you'd get when someone would write someone like Michel LeGrand or Michel Columbier a check big enough to realize a grand vision, this new kid on the block has everyone in jazz turn out to lend a hand. Maybe not everyone but if you look at the credit list, it does go on forever and it's all m ...

Die digitale Jazz - Zeitung (Editor)
Supported by a cast of some of the biggest names in jazz today, composer and guitarist, Jaiman Crunk, presents a variety of original compositions in his debut album, ?Encounters?. The album includes compositions ranging from a refreshing ballad entitled, ?What You Know?, featuring pianist, Bill Anschell, to an upbeat composition full of colorful ...

scottyanow.com (Scott Yanow)
Part of a musical family, guitarist Jaiman Crunk grew up in the San Francisco Bay area, spent years living in Europe, and is now based in Seattle. Encounters is his recording debut and it is a particularly impressive effort for Crunk, both as a guitarist and as a composer. The personnel and instrumentation change from song-to-song on Encounters. ...

All About Jazz (Ian Patterson)
Seattle-based guitarist Jaiman Crunk hasn't taken half measures on Encounters, his debut as leader. In addition to marshalling over 20 top jazz musicians?cherry picked for specific roles?Crunk employs fourteen brass, woodwind and string musicians from the Seattle Symphony Orchestra on half the compositions. These four numbers in particular underli ...

Cadence (Don Lerman)
Original music from guitarist/composer Jaiman Crunk is provided on Encounters, a large scale production recorded over nearly a two-year period. Crunk?s arrangements of his own music utilize both larger ensembles of over twenty musicians and smaller groups of from two to six performers. The larger group, made up of rhythm section plus brass, winds, ...