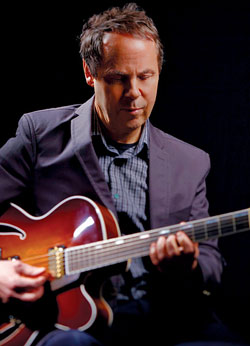 Jaiman was born into a musical family in the San Francisco Bay Area. His great grandparents were vaudeville performers - one grandfather was a singer and the other one was a guitarist. He was given his first guitar, (a Gibson Les Paul that he still has today), at the age of 5. He remembers his grandfather playing and teaching him many other songs of his era as a child. He also remembers his grandfather taking him to hear the fabulous Duke Ellington Orchestra (with Johnny Hodges, Paul Gonsalves, Cootie Williams, etc.) in San Francisco at the age of 12, which left a lasting impression on him of the enormous spiritual power that Ellington's music has. His aunt played the organ at the local church and at family gatherings where the family would play and sing together. Jaiman's parents regularly held jam sessions at their home where he got to meet and play with many great Bay Area musicians when he was growing up.

He studied music both formally and informally with a number of great Bay Area artists including one of his grandfather's close friends -- guitarist extraordinaire, George Cordoba, with whom Jaiman studied for years. He performed with Bay Area jazz, R&B and blues bands throughout his youth, later moving to Europe where he performed with many great American "ex-pat" jazz artists, as well as European jazz musicians and groups from West Africa and South America.

Jaiman's music reflects everything he's experienced in his life, everyone he's met, everything he's heard and everywhere he's been -- it's just that simple. Jaiman recently moved to Seattle from Europe. The single largest influence on his music today is the beautiful, but not always serene, nature in the area.