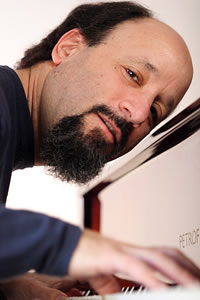 Seattle native Bill Anschell returned to the Emerald City in 2002 after spending 25 years studying, composing, and performing across the country and around the world.

Anschell left Seattle after high school, studying for two years at Oberlin College (Ohio), then transferring to Wesleyan University (Connecticut), where he graduated Phi Beta Kappa with a degree in Music. At Wesleyan, Anschell worked closely with saxophone great Bill Barron. He also studied semi-privately with South Indian mridangum master T Ranganathan, kindling a passion for rhythmic experimentation that has driven Anschell's music ever since.

After leading the life of a jazz vagabond for several years, Anschell settled in Atlanta in 1989. He was initially drawn there by the opportunity to serve as Jazz Coordinator for the Southern Arts Federation (SAF), the regional arts agency of the South. Firing up SAF's jazz department virtually from scratch, Anschell launched a host of high-profile programs, published a book on grantswriting, and created JazzSouth, an internationally syndicated radio show. At night he dove headlong into the city's thriving jazz scene, working as a sideman with various groups and leading his own trio.

By 1992, Anschell's performing itinerary had grown to the point where it demanded his full attention. He left the SAF post, continuing to produce JazzSouth out of his home while focusing on playing and composing. Over the next ten years, Anschell ascended the jazz ranks in Atlanta, leading his trio at major festivals and becoming a first-call accompanist for visiting jazz greats. His trio's highlights included the 1996 Summer Olympic Games, the Montreux Atlanta Festival and four extensive tours of South America.

During the same period, Anschell enjoyed a lengthy association with vocalist Nnenna Freelon, serving as her pianist, arranger and musical director. Among their many performing highlights were the North Sea Jazz Festival in Holland, the Monterey Jazz Festival in California, the Kennedy Center in Washington, and six European tours. Their concerts were broadcast on Radio France, French national television, and NPR's JazzSet. Anschell's piano work and arrangements were featured throughout Freelon's 1996 Concord release Shaking Free, which was nominated for a Grammy as the year's best jazz vocal recording.

Anschell's own CDs have earned critical acclaim and widespread exposure, with several making Jazzweek's national "Top 50" chart for radio airplay. Anschell's 1998 release, a different note all together, was selected by United Press International (UPI) as one of the "10 Best" jazz releases of the year. His 2006 CD, More to the Ear than Meets the Eye, was chosen by numerous critics and radio stations across the country for their "10 Best of 2006" lists. His 2009 duo CD of spontaneous improvisations with saxophonist Brent Jensen was described by Cadence as "startlingly beautiful, surprising, and powerful...a transforming experience." And his 2011 solo piano release, Figments was called "magical" in Thomas Conrad's JazzTimes review.

In 2001, Anschell was selected by the American Composers Forum for its Composer-in-the-Schools program; his residency included a commissioned piece for chamber orchestra. Since 2003, his original compositions have received widespread cable and network exposure, appearing on programs including NBC's The West Wing, NCIS: LA, HBO's acclaimed series The Wire, and HBO's Bessie Smith biopic, Bessie.

In 2008, Anschell's Atlanta trio reunited for a fifth South American tour, visiting the Colombian cities of Medellin, Pereira and Manizales; in 2012 the trio made its fourth visit to Peru, and in 2014 its third trip to Paraguay.

Anschell is also well known as a jazz humorist, writing jazz vignettes and a monthly jazz etiquette column. His satirical essay, "Careers in Jazz," is the all-time most-read piece on leading jazz website allaboutjazz.com with more than 250,000 hits, and was prominently featured in a Wall Street Journal story on jazz audiences. In 2014 he was a winner of the inaugural Paul Desmond Award, allaboutjazz.com's celebration of the funniest jazz artists.