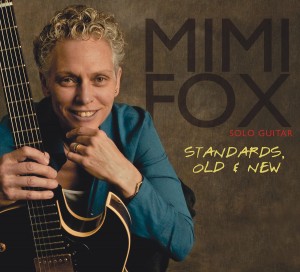 To say Mimi Fox's touch, sound, sensitivity, and understanding of the guitar as a solo vehicle of expression is masterful would be an understatement. This is simply some of the best guitar music I've heard.
- Jim Josselyn, Cadence Magazine

"Standards, Old and New" is the second in a series of recordings of solo guitar gems that highlight Mimi's "consummate mastery" of the instrument and reveals the beauty and excitement of these classic compositions. From swinging and harmonically sophisticated, to lush and tender, this is a collection that is bound to inspire years of repeated listens. "...a prodigious talent who has not only mastered the traditional forms but has managed to reinvigorate them." - Guitar Player Magazine.

All About Jazz (C. Michael Bailey)
Guitarist Mimi Fox's nearly 30-year career has produced several solo standards recitals. Standards, Old & New steps out of the box for some not-so-standard standards from the folk realm (pastoral arrangements of Woody Guthrie's "This Land is Your Land," The Beatles' "She's Leaving Home" and Bob Dylan's "Blowin' In The Wind") and more re ...

The Jazz Word (John Barron)
For her third solo guitar release, San Francisco-based Mimi Fox blends folk, pop and jazz standards into a collection of accessible, high spirited jazz. Woody Guthrie's "This Land is Your Land" opens up the disc with bluesy inflections and impressive double time soloing with bass lines, chords and riffs spread out in even proportion. "Cry Me a ...

Cadence (Jason Bivens)
This terrific, unpretentious solo recording bears some comparison with fellow guitarist Eric Hofbauer's recent solo reading of Americana. But Fox's bright, uncluttered, unvarnished archtop playing is more clearly in the lineage of Jim Hall and Joe Pass. She marries this approach with a number of familiar and unexpected pieces, brought together by ...

East Bay Express (Lee Hildebrand)
Playing solo jazz guitar ain't easy. Unlike piano, on which an unaccompanied musician can do bass lines and/or chords with the left hand and melodies with the right, solo guitar affords few such possibilities, unless the picker uses the tapping technique associated with Mimi Fox's friend Stanley Jordan. On her third solo album out of nine release ...

Jazz Guitar Society of Western Australia (Ian MacGregor)
Recording a solo jazz guitar album is no mean feat and even many of the great players have declined to record a whole album solo. It takes a combination of all your technical skill, instant ideas and the bravery and confidence to execute it, and this being Mimi Fox?s third recording of solo guitar pieces it is evident she has mastered the art. Mimi ...

JazzScan (Ric Bang)
If you love guitar, this album is a must. This instrument isn?t often presented in a solo jazz format, as is the case with this release, but the artist rarely is as talented as Mimi Fox. She?s a New York City native who began her music career at age 9 playing drums, then switched to guitar a year later. The first album she purchased was John Coltra ...

Guitar Player Magazine (Barry Cleveland)
Mimi Fox Expands Jazz Guitar from the Inside Out MIMI FOX WAS A PRECOCIOUS YOUNGSTER, playing drums and then guitar before reaching her teens. She rapidly taught herself to play pop, folk, R&B, and other styles?but it was encountering John Coltrane?s Giant Steps that set her firmly on her current path. She relocated from New York to the San Franci ...

Times Square Magazine (Alex Zaglin)
Mimi Fox: A Real Guitar Hero Mimi Fox was something of a child prodigy, and her fascination for guitar has carried on through her adult life. She began not just playing, but also teaching guitar before she hit her teenage years. Fox is a New York City native, but she has called the Bay Area home for many years. She loves to come back to play here ...