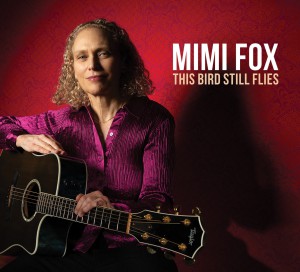 Beyond her passion and virtuosity, Fox plays with a profundity that only comes from a lifetime of devotion to ones art.
Guitar Player Magazine

Reviews of This Bird Still Flies

Midwest Record (Chris Spector)
A solo guitar tour de force by one of the pre-eminent practitioners of our age, Fox gets back to her acoustic roots and takes you back to the 70s when solo guitar records like this that made your jaw drop came along a lot more frequently than once in a blue moon. A master class and great music all at once, this is a sterling example of why so many ...

Berkeleyside (Andrew Gilbert)
When Mimi Fox talks about visiting Joe Pass, I picture the legendary guitarist sitting lotus position on top of a Himalayan peak, a cigar tucked firmly into the corner of his mouth as he utters cryptic jazz koans. Gruff and avuncular, Pass wasn't really the guru type, but more than any other player of his era he mastered the lonely art of unacco ...

Hot House Jazz (Elzy Kolb)
Mimi Fox has called Northern California her home since 1980, but the New York-born guitarist still has a special place in her heart for the Big Apple. "I love the vivacity, intensity and energy. There's a straightforwardness that I really miss, it feels honest and real, it's not artifice and BS. I love that you can buy a New York Times without the ...

Taylor Guitars (Colin Griffith)
Acoustic Flight Path: Interview with Mimi Fox: When we last wrote about internationally renowned guitar virtuoso and music educator Mimi Fox (summer 2018), she was still enjoying the honeymoon phase with her new Builder's Edition K14ce. As Fox shared at the time, she was returning to her acoustic roots and looking forward to using her new Taylor ...

JazzTimes (Mike Joyce)
Nothing humbles a jazz guitarist accustomed to playing a solidbody or archtop instrument quite like an acoustic flattop, even if it's a top-tier Taylor cutaway. There are, of course, musicians who can switch-hit with deceptive ease—Pat Metheny, for one—and now the same can be said of Mimi Fox with the release of this, her first full-length acou ...

Downbeat (Howard Mandel)
4-STARS Proving she has nothing to prove on This Bird Still Flies, meticulous Bay Area guitarist Mimi Fox uses her 11th recording as leader or co-leader to showcase her utter mastery of the acoustic instrument. Mixing five originals with standards, Beatles songs and a national ode, the 62-year-old guitarists' guitarist here takes care to let every ...

Jazz Journal (London) (Bruce Lindsay)
Mimi Fox has been playing guitar for over four decades and released her first album in the 1980s, but This Bird Still Flies is her first all-acoustic recording – mostly on a Taylor acoustic, with Day Tripper featuring a baritone guitar. Mixing self-penned tunes with jazz standards and a couple of Lennon/McCartney numbers, the album gives Fox a ch ...