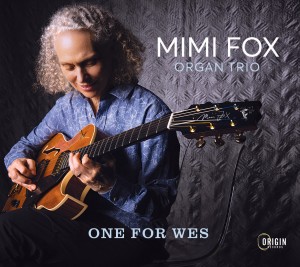 As a celebration of the 100th anniversary of Wes Montgomery's birth, guitarist Mimi Fox chose to dive deep into the iconic Hammond B3 trio sound. Her program of Montgomery-inspired originals displays her dazzling virtuosity while running the musical gamut from greasy blues and funk, to luscious ballads and blazing bebop. With her longtime Bay Area trio of organist Brian Ho and drummer Lorca Hart, Mimi rekindles her experiences from over the years with the late great Joey DeFrancesco and Barbara Dennerlein, delivering an inspired tribute to the genre and to the towering legacy left by Indianapolis' finest.

"Beyond her passion and technical virtuosity, Fox plays with a profundity that only results from a lifetime of commitment and total immersion in one's art." - Guitar Player Magazine

Reviews of One for Wes

Couleurs Jazz (Paris) (Thomas Houbron)
It's January 2023, and for guitarists, from amateurs to the very best, this is a year that cannot be insignificant… Indeed, on March 6th of this year, we will celebrate the 100th anniversary of the birth of the greatest representative of the "six strings" (according to me, but I am not alone): Wes Montgomery! Every jazz guitarist has the maste ...

WDCB (Chicago) (Paul Abella)
The Mimi Fox Organ Trio is made up of three fantastic and swinging musicians: drummer Lorca Hart, organist Brian Ho (who needs to record a lot more than he does), and, of course, guitarist Mimi Fox. On their new CD, One for Wes, we get a chance to hear them in a multitude of different settings, from burners like "Mr. White's Blues" or "Pack of Lies ...