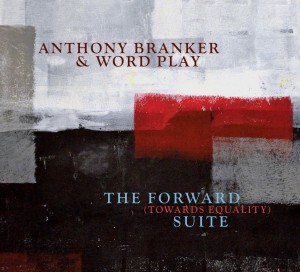 ...a serious composer who does a lot more than write tunes...his music is steeped in the deeper sources of jazz.
- All About Jazz

For his sixth recording on Origin Records, composer Anthony Branker has enlisted a powerhouse version of his Word Play group, featuring saxophonists David Binney and Ralph Bowen, trombonist Conrad Herwig, pianist Jim Ridl, bassist Kenny Davis, drummer Donald Edwards, conguero Renato Thoms, vocalist Alison Crockett, as well as sixteen 5th Grade students from Martin Luther King, Jr. Elementary in Piscataway, New Jersey providing spoken word contributions. With music inspired by personal reflections on what America means to him as a first-generation American; what it has meant to family members who immigrated to the U.S. from the West Indies; and what it might mean to future generations of his family, Branker has created a twelve-movement extended work that is reflective of the qualities he sees as comprising the essence of America and the spirit of its people. Another impressive and inspiring work from the pen of this thought-provoking composer.

Reviews of The Forward (Towards Equality) Suite

Midwest Record (Chris Spector)
This cat has so many facets it's hard to keep them all straight. Here, we find him lining up some killer cats and getting his non-commie Paul Robeson on for some civil rights jazz and poetry for a new era that might finds it's roots in the past but is looking ahead. If you want music with a message, this is the stuff that delivers it in right o ...

JazzTimes (Britt Robson)
Anthony Branker has released an album on the Origin label every year since 2009, honing a hybrid of freewheeling postbop and social commentary, abetted by judicious dollops of funk, fusion, spoken word, clave and polyrhythmic percussion. That's a heady stew, but the effect is not jumbled, as composer-director Branker often incorporates these elemen ...

Jazz Weekly (George W. Harris)
This session lead by composer and music director Anthony Branker can be approached one of two ways. Musically, it boasts of a horn section of David Binney/as, Ralph Bowen/ts-ss-fl and Conrad Herwig/tb that is second to none, with Bowers delivering a riveting tenor solo on “Our Dreams.” The rhythm section of Renato Thoms/perc, Donald Edwards/dr, ...

Downbeat (Joe Tangari)
In 1999, Anthony Branker was forced to stop playing trumpet due to a medical condition. Where many musicians would have felt silenced losing their ability to play, Branker shifted his energy to composing and assembled two collectives, Word play and Ascent, to bring his music to life. Word Play is the band on his most recent release, The Forward ... 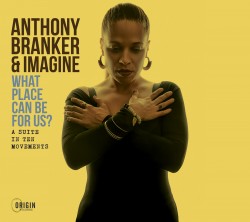 Anthony Branker & Imagine
What Place Can Be for Us?
Origin 82866 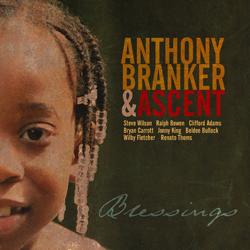