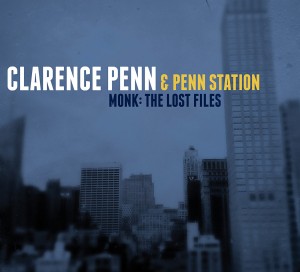 ...gesture and space surging from a place of heart-felt and fluid integrity...Penn exudes such enthusiasm and love for the music - it is simply impossible not to feel uplifted.
- JazzTimes

Since his arrival in New York City in 1991, drummer / composer / arranger Clarence Penn has placed his unique blend of mega-chops, keen intellect, and heady musicianship at the service of a staggering array of A-list artists, all documented on several hundred studio albums. On this recording, Penn leads his dynamic quartet through thoroughly fresh and modern renditions of classic Thelonious Monk staples. Filled with the spirit and joy associated with Monk, he's taken all the things he loves in the music and brought them into the present.

Reviews of Monk: The Lost Files

Midwest Record (Chris Spector)
One day, someone will do a tribute to Monk and some snappy writer will conclude, ‘well, you needn’t’, but this isn’t that day. Super session drummer Penn and pals do a user friendly, contemporary spin on Monk that keeps the music breathing and sounding forward. A tasty, passionate set, Monk lives just as much as Bird does. Well done. ...

WBGO - New York (Tim Wilkins)
No, Monk: The Lost Files isn’t a master tape drummer Clarence Penn found stuck behind the stacks at the Library of Congress. But the story is just as good. The way Clarence tells it, a glass of wine at his son’s second birthday party led to a computer dysfunction that ate some tape he desperately wanted to keep. Penn had recorded a rhythmic ...

KUCI - Irvine, CA (Hobert Taylor)
Drummer Penn along with the amazing Chad Lefkowitz-Brown on Sax, tears apart and puts back together Monk's greatest hits like William Burroughs when he cut up and reconstructed text. Like "Naked Lunch", this re-construction is revelatory. Particularly successful are "In Walked Bud", "Bemsha Swing","Rhythm-A-Ning" and Penn's sole original ...

New York Times (Nate Chinen)
Clarence Penn, like Antonio Sánchez, is a jazz drummer of exuberant poise, and on his own albums, he has addressed music both original and canonical. Monk: The Lost Files (Origin Records), a Thelonious Monk tribute out this week, clearly belongs to the second category. But Mr. Penn, leading a quartet with the saxophonist Chad Lefkowitz-Brown, the ...

Downbeat (James Hale)
If you were unaware of Clarence Penn's sharp, creative work with trumpeter Dave Douglas, or his years of empathetic, intelligent playing as a member of Maria Schneider's orchestra, you could be forgiven for assuming that Monk: The Lost Files was one too many recordings of Thelonious Monk classics. Penn's audacious interpretation of "Well You Ne ...

Amazon (William F. Beran )
5 STARS Monk Reimagined There are lots of albums out there of Monk's music interpreted by other musicians, but there is none like this one. Clarence Penn brings his own sense of rhythm to Monk's lines and the music comes out like something totally new and fresh. A reminder, if we needed one, of just how great and timeless the music of Monk is. Pl ...

Jazz Weekly (George W. Harris)
Drummer Clarence Pann shows some guts by not only tackling the Thelonious Monk Songbook, but using a tenor saxist (Chad Lefkowitz-Brown) that sounds alarmingly like Monk teammate Charles Rouse. Except for the use of a Rhodes keyboard by Gerald Clayton on “I Mean You”, the rest of the songs are with an acoustic piano, so you can’t help but mak ...

All About Jazz (C. Michael Bailey)
5-STARS A well-established creative paradigm exists to justify Clarence Penn & Penn Station's recording Monk: The Lost Files. "Classical" music is often considered that music, composed long ago, that has stood the test of time, remaining viable to the public in recordings and live performance. These composers of this music tend to be Europeans f ...

JazzTimes (Britt Robson)
It is a testament to how singular and beloved the music of Thelonious Monk is that the slightest changes to it can be unsettling. Almost from the moment drummer Clarence Penn and his quartet Penn Station launch into "Well, You Needn't," Monk devotees will feel like something is off. The overall tone is more flippant than wry, words are being whispe ...