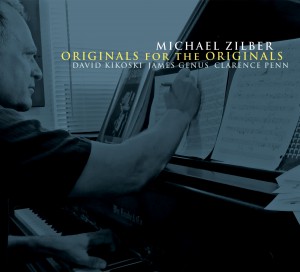 ...one of the premier releases of all time on Origin. I think it's going to go down as a historically important recording. (Zilber's) passion and love for those "originals" shines through in his playing on this one.
Dr. Brad Stone, The Creative Source

The Bay Area saxophonist / composer's 11th recording as leader or co-leader is a labor of love that reflects both his keen sense of the history of the music and his infinite capacity to SWING. Citing the profound influence of seven sax masters - Michael Brecker, Sonny Rollins, Dave Liebman, Wayne Shorter, Joe Henderson, John Coltrane and Paul Desmond - Zilber, along with New York greats Dave Kikoski on piano, bassist James Genus, and drummer Clarence Penn, has fashioned a potent homage that is infused with all-knowing nods to his heroes. "...art music of the highest order performed with passion, wit and verve." JAZZTIMES.

Reviews of Originals for the Originals

Berkeleyside (Andrew Gilbert)
Over the past 15 years or so the Albany saxophonist Michael Zilber has recorded a series of critically hailed collaborations, joining forces with an imposing array of master improvisers like drum maestro Steve Smith, saxophone legend Dave Liebman, and the painterly guitar explorer John Stowell. But Zilber's latest album Originals for the Origina ...

Midwest Record (Chris Spector)
In which we find the sax ace going full metal daddio playing tribute to 7 of his sax heroes with originals that have some manner of sly reference to the original daddios. A high octane, swinging set, this is sure to reach the inner recidivist daddio in any jazzbo that wants to jump on board the eternal groove to Groovesville. Snazzy stuff through ...

Vento Azul (Japan) (Editor)
Michael Zilber's eleventh album as a leader, he's a talented tenor saxophonist who has been active since the 1980s. A one-horn quartet working with contemporary NY's top rhythm players such as David Kikoski, James Genus and Clarence Penn. The originals are dedicated to the saxophonists he has been strongly influenced by, including Michael Brecker, ...

Jazz Weekly (George Harris)
Michael Zilber uses his compositional skills as well as his soprano and tenor saxes to give tribute to some of his musical inspirations. The core team of David Kikoski/p, James Genus/b and Clarence Penn/dr is used for all of the songs except one, the darkly swinging "Hen House" dedicated to Joe Henderson. Other Selmer stars include a Wayne Shorter, ...

Jazz Scan (Ric Bang)
Instrumentalist/composer Michael Zilber is better known by fellow musicians than by jazz fans. Born in Vancouver, B.C., he moved to Boston in his late teens, then to New York City about five years later. It didn't take long for his talents to be recognized by artists who frequented that area. Zilber performed or recorded with giants such as Dizzy G ...

Audiophile Audition (Robbie Gerson)
5-STARS Saxophonist Michael Zilber has an unusual geographic history. He was born in Vancouver, Canada before moving to Boston as a teenager. He moved to New York and worked with Sonny Sitt, Dizzy Gillespie, Dave Liebman, Dave Douglas, Rachel Z and Narada Michael Walden among many. While In New York, he recorded two critically acclaimed albums, Th ...

All About Jazz (Paul Rauch)
4 1/2 STARS Saxophonist/composer Michael Zilber is better known by fellow musicians than by the jazz public, this is an unfortunate truth. The Vancouver, B.C., native moved to Boston in his late teens, then to New York City to begin his musical odyssey. Musicians there recognized his prodigious talent, resulting in recordings with jazz royalty suc ...