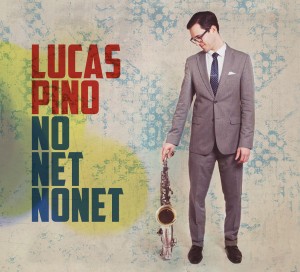 That feeling of navigating the unexpected is probably the most exciting part of watching a group like [the No Net Nonet] perform...with all of its members sonically bouncing around, building and expanding upon each other's ideas until a greater sum bursts forth...
- The Villager

With his monthly residency at New York's Smalls Jazz Club, saxophonist Lucas Pino has developed his No Net Nonet into an exciting and deeply musical improvising ensemble. Performing all original compositions, the group forges new ground while maintaining a rich, organic, swinging center. Originally from Phoenix, Pino attended the Brubeck Institute, The New School and Julliard, where he received his Masters in 2011.

Reviews of No Net Nonet

The Jazz Owl (Travis Rogers, Jr.)
Lucas Pino is just getting started and we are fortunate to catch him early in his career and watch what he becomes. He is already an excellent composer—in fact, he was already composing great pieces in high school. His talents were sharpened at the Brubeck Institute, The New School and at Julliard. Nothing hones skills finer, however, than pla ...

Midwest Record (Chris Spector)
Playing a month at a crack at Small’s, this well educated sax man doesn’t let his education get in the way of leading a bebop crew that sounds like they played a set Alfred Lion forgot to release. Crackling with high octane energy throughout, Pino leads his crew through a smoking outing that’ll singe those pesky hairs on your ears that you j ...

Bird is the Worm (Dave Sumner)
Nice straight-ahead set from saxophonist Pino. His nonet attains a strong head of steam and doesn’t relinquish it. Best is just sitting back and listening to their flight patterns. ...

All About Jazz (Jack Bowers)
So there is hope after all. With so much jazz these days soaring into realms that are often uncharted and at times unfathomable, it is a pleasure to hear groups such as tenor saxophonist Lucas Pino's No Net Nonet, which are remarkably creative even as they adhere to the basic precepts of melody, harmony and rhythm. Pino's new album, apparently th ...

KUCI, Irvine, CA (Hobart Taylor)
Hard driving neo big band music circa 1967, clean as a ghost's underpants. They play original tunes by tenor saxophonist Pino. These New York cats have had a residency at Small's for a while. There's a lot of the intimacy of club playing here, a loose tightness that has a lot of charm. "The Fox", "On The Road" and especially "Orange" reall ...

Downbeat (Shaun Brady)
3 1/2 STARS Young tenorman Lucas Pino has led a monthly residency at Smalls Jazz Club with his smart nine-piece ensemble since March 2013, which explains why the band sounds so tight and cohesive on its self-titled debut, No Net Nonet. Out of the gate, the band navigates blistering, breakneck lines with hairpin precision on opener “The Fox,” w ...

Jazz Weekly (George W. Harris)
Tenor saxist Lucas Pino hails from the Brubeck Institute, The New School and received his Masters Degree from Julliard, so he knows his way around a tune. Here, he puts together a nine-piece band for eleven cleverly arranged tunes that mix Mingusy grooves and harmonies and swings like a bopper in the process. Pino himself has an old soul of a so ...

Cadence (Jerome Wilson)
The album is by a sharp, sax-heavy nine piece group very much in the mainstream jazz line. The faster pieces are prickly and kinetic but the slower ones, like "Sunday Play" which features a gorgeous tenor solo by leader Pino and thoughtful bass by Desmond White, tend to have the most personality. Pino's deep-souled soloing is consistently smart and ...

Longplay (Poland) (Robert Ratajczak)
Hailing from Arizona, New York tenor saxophonist Lucas Pino for a long time was a definite attraction performing in clubs as noble as, among others, The Blue Note, The Jazz Standard, Smalls Jazz Club and Dizzy's. For some time, however, he's done concerts around the world, visiting Canada, Australia and European countries (Poland could hear him, ...