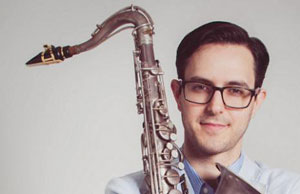 That feeling of navigating the unexpected is probably the most exciting part of watching a group like [the No Net Nonet] perform...with all of its members sonically bouncing around, building and expanding upon each other's ideas until a greater sum bursts forth...
- The Villager

Tenor Saxophonist Lucas Pino works frequently as a sideman for artists including Gideon van Gelder, Richard Boukas, David Lopato, Bryan Carter, Rafal Sarnecki, Nick Finzer, and Jeremy Siskind. His past performance experience also includes Dave Brubeck, Curtis Fuller, Benny Golson, Jimmy Heath, Christian McBride, Carl Allen, Benny Green and David Sanborn. Lucas has traveled to play in Australia, Poland, Spain, Britain, The Netherlands, Brazil, Costa Rica, as well as throughout the United States and Canada. He has appeared at venues such as the Blue Note, Dizzy's, The Jazz Standard, Yoshi's, The Jazz Kitchen, The Rex, and Chicago Symphony Hall. As a leader, he has maintained a monthly residency at Smalls with the No Net Nonet since March 2013.

Originally from Phoenix, Arizona, Lucas grew up singing hymns in church, and in the choir at school. He started playing saxophone at age 10, and the first music he ever listened to was jazz. As a high school junior, Lucas won the Downbeat award for Best Instrumental Soloist in 2004. He attended the Brubeck Institute from 2005-2007, where he studied closely with Dave Brubeck. Lucas finished his Bachelor of Fine Arts degree in Jazz Performance at The New School in 2009. He attended Juilliard from 2009-2011, where he received a Master of Music.

"Sound is like a rainbow, you hear every color. On the saxophone, the entire tonal and color palate should be available. I like to draw on a wide range of influences even within one solo, going from a very bright to dark sound, using straight tone or subtone. Music should be operatic, dramatic, and full of gesture. It should tell a story and sing a song simultaneously. Music should be a stimulus that activates the listener's imagination and transports them to another place, where anything is possible." - Lucas Pino