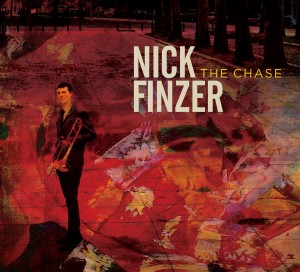 ...a new voice to the pantheon of upcoming trombone greats in the making... Great compositions, playing, and overall leadership of the band... the WHOLE package.
- Wycliffe Gordon

Reviews of The Chase

Midwest Record (Chris Spector)
You have to love it when a cat can graduate from Julliard without letting it go to his head. Bone man Finzer takes his sweet time between releases and we are wise not to rush him. Charting some new courses that give us the opportunity to follow him without tripping, this fleet fingered, buoyant jazzbo makes his bone talk while supporting his comp ...

All About Jazz (Bruce Lindsay)
The trombone's gone through a few good times and a few bad times as a front-line jazz instrument. Thankfully, for all lovers of this particular horn, these times are good times. Nick Finzer is one of the players responsible, a trombonist and writer with flair and variety. The Chase, his second album, helps to ensure that the good times will stick ...

The Vertical Spin (Rob Young)
After what appeared to be a decline of trombonist missing in action as featured soloist on the jazz scene, it's great to see the emergence of exciting newcomers on the horizon like the accomplish composer, arranger, and bandleader Nick Finzer at the helm. He arrives ready to play his invigorating compositions on second offering appropriately titled ...

Downbeat (Brian Zimmerman)
EDITOR'S PICK Many jazz composers count Duke Ellington as a major influence. But for trombonist Nick Finzer, Ellington was more like an impetus. Finzer first became interested in jazz after participating in the Essentially Ellington competition as a high schooler, in which jazz ensembles perform Ellington compositions for adjudication. The compet ...

Bird is the Worm (Dave Sumner)
Nifty straight-ahead set from trombonist Finzer. His big band/large ensemble experiences definitely inform his music when the headcount doesn't range so large. Plenty of big sound goodness, but when the group slows things down and let's the music breathe, that's when the pull of attraction begins. Featuring Glenn Zaleski on piano, Lucas Pino on ...

Downbeat Profile (Dan Ouellette)
Trombonist Nick Finzer, 27, keenly recognizes the ebbs and flows of the jazz idiom. He appreciates its fluidity as pop music melds into the straightahead language of the jazz legacy. But he's taken a different road for revitalizing the heritage of jazz for the modern age. "I don't want to abandon the tradition," said the tall and slender Finzer ...

Jazz Weekly (George W. Harris)
Trombonist Nick Finzer leads a sublimely swinging sextet through a collection of well crafted originals here. He teams up with Lucas PIno/reeds, Alex Wintz/g, Glenn Zaleski/p, Dave Baron/b and Jimmy McBride/dr and they glide easily with style and grace on medium tempo toe tappers like "Life Happens" and "All Hype." Finzer has a warm tone to his hor ...

The Jazz Owl (Travis Rogers, Jr.)
Any list of promising young trombonists has got to include Nick Finzer at or near the top. In "The Chase" (Origin Records 82693), his second album as leader, Finzer brings along the best and the brightest: Pianist Glenn Zaleski, Saxman Lucas Pino, guitarist Alex Wintz, Dave Baron on bass and Jimmy Macbride on drums. From the very first track, these ...

WTJU - Richmond (Dave Rogers)
This is apparently trombonist Finzer's first release as a leader and it includes eleven originals from the man himself. He earned a Masters degree from the Julliard Jazz program two years ago. While there he was mentored by Steve Turre. on this release, Finzer leads a tight group of musicians, including Lucas Pino (sax), Alex Wintz (guitar), Glenn ...

International Trombone Association Journal (Brian Keegan)
The Chase, Nick Finzer's latest release, features the up-and-coming New York trombonist's finest playing and creative composition. The album displays a wide breadth of stylistic influences and a searching, pining quality in both writing and improvising. "Life Happens," the opening track, has a driving, intense quality, though it has the same ...

Improvijazzation (Rotcod Zzaj)
For some reason, I'd never associated trombone jazz with album titles like "The Chase"… but Nick & his (many) musical cohorts surely pull it off on great tunes like the stunning opener, "Life Happens"… in fact, this tune has some of the highest energy licks I've heard (yet) in 2016. The title track, "The Chase", uses plenty of cut & run change ...