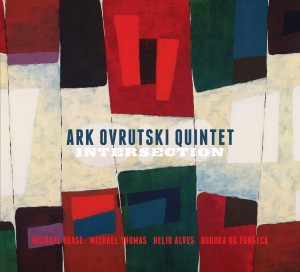 In New York City since 2005, by way of Kiev and Moscow, bassist/composer/arranger Ark Ovrutski connects generations, continents and unique musical voices through his groups and projects. Integrating here the great Brazilian musicians, pianist Helio Alves and drummer Duduka Da Fonseca, with southern American transplants, trombonist Michael Dease and saxophonist Michael Thomas, the band, with an age range of over thirty years, provides an exciting example of how the progressive jazz tradition sounds today. From Ovrutski's arrangements of modern jazz standards - Bill Evans's "Waltz for Debby," Wayne Shorter's "Tom Thumb," and Kenny Dorham's "La Mesha," to tart originals from Da Fonseca, Dease and Ovrutski, he means to make music with all the nuance and technical finesse of Western classical tradition, with which he began, and all the spirited soulfulness of jazz, at which he's arrived.

All About Jazz (Dan Bilawsky)
4 1/2 STARS Ukrainian bassist Ark Ovrutski arrived on American soil just over a decade ago, and he's been rather busy ever since. A nonstop go-getter from his earliest days, Ovrutski immediately made the most out of that move, steadily working his way into the ultra-competitive New York jazz scene and seeking out opportunities to further his play ...

Elmore Magazine (Mike Jurkovic)
Since his arrival in America from Kiev in 2005, bassist/composer Ark Ovrutski has steadily gained deserved entrance into the NY jazz scene with his intuitive fusion of global musics and their vivid interplay, all of which is on full display on Intersection. Bill Evans's imitable "Waltz for Debby" opens Intersection and finds this top-shelf qu ...

Latin Jazz Network (Raul da Gama)
The quality of playing on Intersection not only by its leader as bassist, Ark Ovrutski, but all of the musicians is altogether exceptional. Ark Ovrutski takes nothing for granted in music. Nor should we in listening to him. If you know how your ancestral family of bassists ‘goes', or how any other musician ‘goes' then this almost certainly isn' ...

Jazz Weekly (George W. Harris)
Bassist Ark Ovrutski delivers a snapping session as he leads a team of Michael Dease/tb, Michael Thomas/as-ss, Helio Alves/p and Duduka Da Fonseca through a rich mix of originals and covers. He displays his rich and resonant sound right off the bat here as he introduces the album with "Waltz For Debby" before the warm trombone and alto glide in ...

JazzTimes (Thomas Conrad)
Intersection is an unusual combination of personalities. Ark Ovrutski, originally from the Ukraine, is a bassist given to dark, heavy, solemn solos. But he likes to surround himself with light-footed Brazilians (pianist Helio Alves, drummer Duduka Da Fonseca) and American speed demons (trombonist Michael Dease, saxophonist Michael Thomas). The net ...

Downbeat (John Ephland)
*** There are some nifty passages that emerge on bassist Ark Ovrutski's new album, a collection of originals mixed with a few covers. The playing is top-notch, and the interaction between group members is at a consistently high level, making Intersection a fine acoustic jazz outing. Starting with Bill Evans' "Waltz For Debby," the mood is f ...