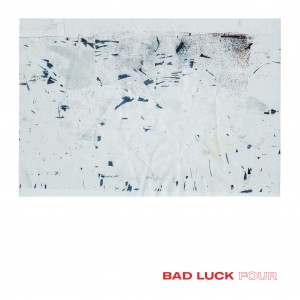 Bad Luck chop up time and space into jagged, unpredictable shapes, but sometimes they hit upon a quasi-funk groove that sounds like an asymmetrical avalanche. Most of the time, you have no idea where they're going, but they impel you to follow closely, no matter what.
Dave Segal, The Stranger

Bad Luck performs in another cosmos from most bands. Emerging out of more than a decade of collaboration, the new album Four "bears down on you like a cyclone of fire" (The Stranger) and is a genre-defying supernova of electronics, hip hop, metal, folk and jazz.

Saxophone/electronics player Neil Welch and drummer Chris Icasiano met ten years ago as jazz students at the University of Washington and built a friendship as they discovered free improvisation together. Or, as Welch puts it, they "collectively destroyed the fabric of their musical identities by slamming their instruments like a hammer on an anvil."

The two spent years making epic long-form compositions (and three albums) in the tradition of free jazz legends like John Coltrane. Their new album, Four, recorded at Avast Studios with Randall Dunn (Sunn O))), Earth, Marissa Nadler) slams the epic energy of those free improvisations into shorter, rhythmic forms. Welch screams and breathes into his horn, acoustically creates chords, and uses electronics more familiar to guitar players. Icasiano does things that seem impossible with four drumsticks at once. The music has been electrifying audiences in Seattle at packed shows. Bad Luck Four is a big album ready for a big stage.

All compositions by Bad Luck

The Answer is in the Beat (Paul Simpson)
Bad Luck are a Seattle-based duo consisting of drummer Christopher Icasiano and saxophonist Neil Welch, who also handles electronics. Together, they have an interstellar sort of chemistry comparable to Chicago Underground Duo, along with some of the prismatic firebreathing of Colin Stetson. This is easily much darker, stranger, heavier, and spacier ...

Earshot Jazz (Ian Gwin)
For over a decade, Seattle-based duo Bad Luck—that's Neil Welch (saxes, electronics) and Chris Icasiano (drums)—have packed and unpacked their deceptively simple formula of drums and saxophone. Through their deep musical partnership, they continue to recast the mold of contemporary music. Over countless fiery performances and three full-length ...

Bandcamp Daily (Dave Sumner)
Best Jazz on Bandcamp / Aug 2018 The Bad Luck duo is a powder keg of intensity, and it takes only the faintest spark to detonate. But the resulting combination of saxophone and drums isn't solely defined by its heat. There's a beguiling motion to the flames, a hazy sense of melodic deliberateness that's the key to the music's hypnotic effect. Drum ...

Free Jazz Blog (Gregg Daniel Miller)
***** (Five Stars) As Bad Luck, Neil Welch (tenor saxophone & live electronics) and Chris Icasiano (drums) have played roughly 60 shows a year for over 10 years. Their latest CD out on Origin Records, Four, displays the mature, complex seamlessness which comes from two players who know what the other is about. Welch's dexterous chops atop his u ...

Jazzenzo (Netherlands) (Georges Tonla Briquet)
Translated from Dutch: 'Four' is the fourth CD of the duo Bad Luck. Life can be simple. However, this music is not. Tenor saxophonist and electrical wizard Neil Welch and drummer Christopher Icasiano deliver the soundtrack for an imaginary trip to a dimension far away from here. The drumbeats and soundscape scenes from the intro ('Four') sound ...

Heavy Blog (Scott Murphy)
Bad Luck – Four (ambient jazz, avant-garde jazz) Man, what a great album to kick off the column with. The first of my two numerically-titled picks is also the most easily-labeled "jazz" album of all my selections from the past few months. This isn't meant as a knock against Bad Luck, the moniker of duo Neil Welch (saxophone, live electronics) ...

All About Jazz (Ian Gwin)
4-STARS For over a decade, Seattle-based duo Bad Luck—that's Neil Welch (saxophones, electronics) and Christopher Icasiano (drums)—have packed and unpacked their deceptively simple formula of drums and saxophone. Through their deep musical partnership, they continue to recast the mold of contemporary music. Over countless fiery performances an ...