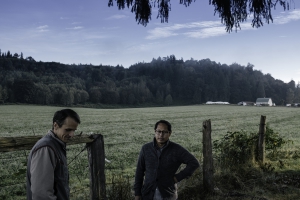 Bad Luck's music bears down on you like a cyclone of fire...
Dave Segal, The Stranger

Bad Luck performs in another cosmos from most bands. Emerging out of more than a decade of collaboration, the new album Four "bears down on you like a cyclone of fire" (The Stranger) and is a genre-defying supernova of electronics, hip hop, metal, folk and jazz.

Saxophone/electronics player Neil Welch and drummer Christopher Icasiano met ten years ago as jazz students at the University of Washington and built a friendship as they discovered free improvisation together. Or, as Welch puts it, they "collectively destroyed the fabric of their musical identities by slamming their instruments like a hammer on an anvil."

The two spent years making epic long-form compositions (and three albums) in the tradition of free jazz legends like John Coltrane. Their new album, Four, recorded at Avast Studios with Randall Dunn (Sunn O))), Earth, Marissa Nadler) slams the epic energy of those free improvisations into shorter, rhythmic forms. Welch screams and breathes into his horn, acoustically creates chords, and uses electronics more familiar to guitar players. Icasiano does things that seem impossible with four drumsticks at once. The music has been electrifying audiences in Seattle at packed shows.