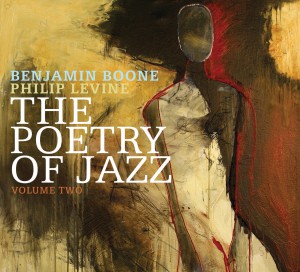 Poetry and jazz have long been great partners, but "The Poetry of Jazz" offers a fresher take, just like Levine's poems give us new, heroic looks at the ordinary lives of the lower-middle class...The Poetry of Jazz is a master poet's contribution to the musical genre, one not to be missed.
THE PARIS REVIEW

Without knowing or planning it, saxophonist/composer Benjamin Boone has spent his life preparing for a collaboration with Philip Levine. Long fascinated by the inherent musicality of the spoken word, Boone crossed paths with the Pulitzer Prize-winning poet as fellow professors at California State University, Fresno, and they ended up working closely together in the three years before Levine's death in 2015. Boone and Levine's 2018 release, "The Poetry of Jazz," captured a genre-expanding partnership unlike anything else in the jazz canon. "Volume Two" completes the program with 14 poems and three instrumental compositions by Boone. "Boone knows where the thing called poetry lives, an ocelot among the waters, a sky-shaped Rain God that flares down upon us...He is one of the very few that can lure Phil's poetry-magic and call it out and show it to the world...Beyond words up there with the muses." - U.S. POET LAUREATE JUAN FELIPE HERRERA.

Reviews of The Poetry of Jazz, Vol. 2

WTJU (Dave Rogers)
This collection is basically a melange of original poetry and narration by Philip Levine and compositions by Benjamin Boone (alto, soprano sax) on 12 of the 18 performances, with the remainder composed by various members of the players. The musicians include David Aus (piano), with the addition of Craig Von Berg on piano on six songs), Spee Kosloff ...

All About Jazz (VICTOR L. SCHERMER )
4-STARS Poetry and music are overlapping forms of expression. Poetry emphasizes the musicality of words. Music has many features of poetry including sound, syntax, and meaning. Still, only a few poets have spoken their poems in a musical context. It is hard to do effectively because speech and music have different functions: speech is about things ...

The Collegian - Fresno State University ( Marilyn Castaneda )
When his first volume of "The Poetry of Jazz" released last year, nobody knew it would garner attention across the world with numerous accolades, spurring the release of his second volume this year. Saxophonist and composer Benjamin Boone, a music theory professor at Fresno State, has had his music performed in 29 countries and is heard on more ...

Downbeat (Bradley Bambarger)
The first release from the collaboration of saxophonist Benjamin Boone and Pulitzer Prizewinning poet Philip Levine struck an unexpected chord: The album placed No. 3 in last year's DownBeat Readers Poll. The Poetry Of Jazz, Volume Two was recorded at the same sessions that yielded the initial disc, held the year before the jazz-loving poet's death ...

UK Vibe (James Read)
In the last years of his life Pulitzer prize-winning former US Poet Laureate and jazz aficionado Philip Levine undertook a series of collaborations with saxophonist and band leader Benjamin Boone. Last year saw the posthumous release on Origin Records of the first volume with an all-star lineup, 2019 offers this second installment. Levine, the s ...

Bill's Blog (William Minor)
The third artist I would like to celebrate is Pulitzer Prize, National Book Award (twice!) winner and Poet Laureate of the United States (2011-1012) Philip Levine—and by "extension," saxophonist Benjamin Boone. I was fortunate to become friends with Phil, under unusual circumstance. We discovered we had attended the same Art Tatum/Erroll Garner ...

San Francisco Classical Voice (Andrew Gilbert)
In many ways, Fresno saxophonist/composer Benjamin Boone is in the vanguard of the jazz/poetry movement. Last year he released his captivating collaboration with the late Pulitzer Prize-winning poet Philip Levine, The Poetry of Jazz (Origin), which garnered glowing praise everywhere from The Paris Review to JazzTimes and Downbeat. He followed up in ...