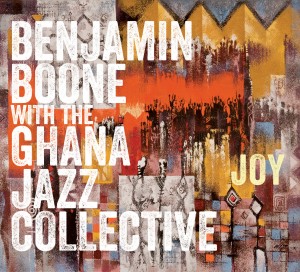 Midwest Record (Chris Spector)
When you think of a Fulbright Scholar heading off to deepest darkest Africa, do you picture a white boy that understands funk? Pairing here with his pals, Ghana Jazz Collective, the two cultures collide in a jolly mash up that proves once again that music is the universal language and how easy it is to resolve any conflict if you really want to. Up ...

All About Jazz (Dan Bilawsky)
4-STARS When saxophonist Benjamin Boone took a sabbatical from his teaching position at California State University Fresno to travel to Ghana as a U.S. Fulbright Scholar, he envisioned a yearlong educational immersion in the music, arts and broader culture of the region. What he couldn't have imagined, which became reality, was connecting with a s ...

Rochester City Paper (NY) (Ron Netsky)
When saxophonist Benjamin Boone—a professor at California State University, Fresno—traveled to Ghana to study as a Fulbright Scholar, he never expected to record an album. But one night at an Accra bar he encountered The Ghana Jazz Collective, a group of musicians as fluent in American jazz as they were in West African traditions. The resulting ...

DownBeat (Hobart Taylor)
Benjamin Boone often explores the intimate confluence of melody and speech. On the two volumes of The Poetry Of Jazz, a collaboration with the late United States Poet Laureate Philip Levine, the saxophonist demonstrated his ability to fluently interact with and reply to a spoken text. On Joy, Boone expands his penchant for conversation. Stemming ...

Amazon (Dr. Debra Jan Bibel )
Benjamin Boone, saxophonist and composer, is also a Ph.D. scholar. He previously released the two distinguished musical volumes of The Poetry of Jazz, and as a Fulbright Senior Specialist Fellow he has traveled to Moldova, Ethiopia, and most recently Ghana for study and music exchange. While in Accra, Ghana, he was astonished to hear mainstream Ame ...

Fresno State College of Arts & Humanities (Benjamin Kirk)
It was hot! It was the summer of 2018 in the city of Accra, about 400 miles north of the equator, and Benjamin Boone and the Ghana Jazz Collective had gathered in the UVSL recording studio — a white concrete building down one of the many dirt side roads. Even with the high-tech equipment, to get clean recordings, the studio had to turn off the ai ...

JazzTimes (David Whiteis)
The Ghana Jazz Collective (saxophonist Bernard Ayisa, keyboardist Victor Dey, Jr., bassist Bright Osei, and drummer Frank Kissi) are an Accra-based contingent whose weekly sessions at the +233 Jazz Bar have become legendary among local aficionados as well as savvy-eared visitors from out of town. Their sound might challenge some listeners' stereoty ...

THE MUNRO REVIEW (Donald Munro)
10 INSIGHTS INTO GHANA AND THE MAKING OF BENJAMIN BOONE'S ACCLAIMED NEW ALBUM At the moment I am listening to the opening song "The Intricacies of Alice" on Benjamin Boone's "Joy," and the act of rolling that title around my brain gives me, well, joy. Which is just one of many reasons that makes this new album for me so aptly titled. There's ...

All About Jazz (Chris M. Slawecki)
Benjamin Boone's set with this band born and grown in Ghana is a genuine cross-cultural jazz Joy. The seeds of Joy were planted when composer-saxophonist Boone spent a year as a US Fulbright Scholar in Ghana in sabbatical from his professorship at California State University (Fresno), to study the country's music and musical traditions. The musi ...

Jazz Weekly (George W Harris)
Benjamin Boone plays alto and soprano sax as he leads a funky team of Bernard Ayisa/ts, Victor Dey/key, Bright Osei/b and Frank Kissi/dr through a set of soulful struts. Sandra Huson adds lovely voice on a handful of the tunes, most notably on the disco ball of "Without You" with Boone's soprano lovely on a tender hearted title track. Osei's finge ...

All About Jazz (Chris M. Slawecki)
4-STARS Benjamin Boone's set with this band born and grown in Ghana is a genuine cross-cultural jazz Joy. The seeds of Joy were planted when composer-saxophonist Boone spent a year as a US Fulbright Scholar in Ghana in sabbatical from his professorship at California State University (Fresno), to study the country's music and musical traditions. ...

Jazz Podium (Germany) (WOLFGANG GRATZER)
Fulbright scholarships are an attractive option, as they promote the international exchange of researchers from and in the USA. The target group also includes musicians. The one from Statesville/North Carolina-born saxophonist Benjamin Boone (*1963) knows how to seize this opportunity. Stays in different countries were and are the result. His trace ...

JazzdaGama (Raul Da Gama)
Charlie Parker and Steve Lacy have inadvertently cast gigantic shadows on both the instruments that Benjamin Boone just happens to play. The former, an alto saxophonist is, quite simply, one of the greatest musicians that ever lived; so great, in fact, that when listening to his inventions we often forget that it was Adolphe Sax, who, in fact, gave ...