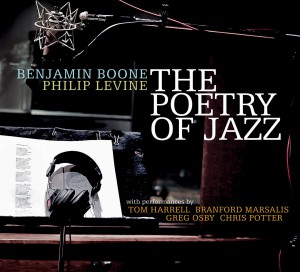 Benjamin Boone knows how to get inside the poem, Phil Levine's inscrutable and imploding loops of poetics, his observations of the seen and unseen. Boone knows where the thing called poetry lives, an ocelot among the waters, a sky-shaped Rain God that flares down upon us. He does this with a myriad of instruments, with human breath chiseling and burning through brass and string, reeds and skin and hands and resin. He is one of the very few that can lure Phil's poetry-magic and call it out and show it to the world...Beyond words up there with the muses.
U.S. Poet Laureate Juan Felipe Herrera.

Without knowing or planning it, saxophonist/composer Benjamin Boone has spent his life preparing for a collaboration with Philip Levine. Long fascinated by the inherent musicality of the spoken word, Boone crossed paths with the Pulitzer Prize-winning poet as fellow professors at California State University, Fresno, and they ended up working closely together in the three years before Levine's death in 2015. Boone and Levine's "The Poetry of Jazz" captures a genre-expanding partnership unlike anything else in the jazz canon. Produced by piano great Donald Brown, the 14-track project features the compositions of Boone, the poetry of Levine, and a stellar band with special guest appearances by Tom Harrell, Greg Osby, Branford Marsalis and Chris Potter.

Reviews of The Poetry of Jazz

Cadence (Robert Rusch)
BENJAMIN BOONE [as/ss] and PHILIP LEVINE [poetry/voice]: THE POETRY OF JAZZ is a terrific CD of jazz and text with tributes to Rollins, Clifford Brown, Coltrane and Bird. 11 of the 14 compositions are by Boone and a pool of 7 musicians make up the backing on tunes. In addition, Chris Potter [ts], Tom Harrell [tpt], Branford Marsalis [ts], and Greg ...

The Arts Fuse (Michael Ullman)
In the early eighties, when we were both teaching in the English department of Tufts University, Detroit-born poet Philip Levine and I became friends. We shared some things: basic literacy, a Michigan background (I had lived in Ann Arbor for four years and he was raised in Detroit), and a love of jazz. I would make tapes for him. (He particularly a ...

Amazon (Dr. Debra Jan Bibel)
Music and poetry have a close relationship, always, from rhyming pop tunes to metaphoric tone poems to soundtrack art songs, lieder, of which classical music abounds. Musical accompaniment has been scored for Goethe and Paul Verlaine and, more recently, Walt Whitman and Emily Dickinson and even Bob Dylan. Thinking specifically about jazz and poetry ...

Fresno Bee (Joshua Tehee)
Very often, when poets get together with musicians, there's a reactionary thing that happens. The band just sort of plays to the reading. And that wasn't going to work for Benjamin Boone. Not when he was collaborating Philip Levine, a Pulitzer Prize winner and National Poet Laureate who wrote tributes to the likes of Charlie Parker and John C ...

All About Jazz (Mark Corroto)
4-STARS Benjamin Boone's The Poetry Of Jazz could easily have been titled The Jazz of Poetry because of the almost interchangeable nature of the terms. The composer/saxophonist's vision to put music to the U.S. Poet Laureate Philip Levine's prose is a reminder to listeners that jazz was birthed by the common man, and is not to be kept in an ivory ...

NPR - All Things Considered (Tom Vitale)
Poet Philip Levine discovered jazz on the radio when he was a teenager. "Like any young person, I wanted to find an art form that the older people in my family would reject, naturally you know," he said to me in a 2004 interview. "I had found T.S. Eliot in poetry: 'God, what kind of garbage is this?' You know. And I heard jazz — rhythmic, driv ...

JazzTimes (Andrew Gilbert)
A singular collaboration between the late Pulitzer Prize-winning poet Philip Levine and Fresno saxophonist-composer Benjamin Boone, this album features the jazz-loving U.S. Poet Laureate delivering his verse with rhythmic panache in the studio, essentially blowing with the musicians (including such special guests as Greg Osby, Tom Harrell and Chris ...

The Paris Review (Jeffery Gleaves)
Before his death in 2015, the former U.S. poet laureate and Pulitzer Prize winner Philip Levine partnered with the saxophonist Benjamin Boone to record live jazz and poetry reading sessions. The Poetry of Jazz, fourteen original jazz compositions paired with fourteen poems by the late poet laureate, has finally been released and is available in nea ...

New York City Jazz Record (John Pietaro)
The tendency of poets to break out of the twodimensional boundary is often seen as a post-War phenomenon, yet poetry was oral long before written language emerged. The African-American jazz tradition, begotten from a brutal melding of divergent cultures, cast a certain boundlessness. The music's central swing and bop allows the poet to emote and em ...

Improvijazzation Nation (Rotcod Zzaj)
Not everyone who reads my reviews know that I got my start in "show business" doing live spoken-word, so Phil's excellent poetry is a total treat for me… it's earned a permanent place on my iPhone (yikes, I'm running outta' space)… Benjamin's hip & silky sax on tunes like "The Unknowable" is what convinced me it had to be there… there are a w ...

The Aquarian (Mike Greenblatt)
Jack Kerouac Would've Loved This Back in the day, ‘50s beat poets like Jack Kerouac, Allen Ginsberg, William S. Burroughs and Gregory Corso would recite their poems to live jazz. The relationship between jazz and poetry has been diluted in the intervening years but, hell, poetry is meant to be spoken aloud (and trending as more and more jazz ...

Jazz Weekly (George W. Harris)
Poetry is delivered in a variety of bohemian settings as saxist Benjamin Boone teams up with a rotating rhythm team as well as guests on this clever and Beat Generation session of the 21st Century. Craig Von Berg contributes Vince Guaraldi-styled piano for "Making Light of It" while cool bop tones are formed for Levine on "Gin." Chris Potter bring ...

Downbeat (Michael Jackson)
4-STARS Like a whiskey aged in charred casks, not a gin - which Pulitzer-winning poet laureate Philip Levine at first taste thought was hair tonic - this collection of world-weary words framed by quick-witted saxophonist/composer Benjamin Boone should be taken neat and steep sampled. Levine grew up in Detroit, and as a teenager during the '50s wor ...

The Normal School Literary Magazine (Optimism One)
WORD MUSIC: A DISCUSSION WITH BENJAMIN BOONE The definitions of music and poetry are similar enough to trouble distinction. In fact, descriptions of poetry often, if not always, include allusions to its musical qualities - its rhythms, its repetitions, its tone, its accents—all words that could also describe a song. And the formal study of po ...

Step Tempest (Richard Kamins)
As someone who has been a fan of poet Philip Levine (1928-2015) for over three decades, when the album "The Poetry of Jazz" (Origin Records) arrived in the mail in early March of this year, I was thrilled. This collaboration with alto saxophonist and composer Benjamin Boone began in 2010 when Boone met the poet on the campus of Fresno State Univers ...

JazzTimes (Britt Robson)
It has been a banner time for high-profile jazz-poetry collaborations. Last year saw the release of Matt Wilson's long-planned tribute to Carl Sandburg, Nicole Mitchell's teaming with Haki Madhubuti and Jane Ira Bloom's musical refractions of Emily Dickinson's terse verse, among other projects. But now there is The Poetry of Jazz, providing us with ...

The Jazz Duck (Editor)
School is in again, so I finally feel inclined to consider this most academic of contemporary jazz endeavors, which has been in my inbox for a while now. Though it hearkens back to '50s and '60s poetry-and-jazz products involving Jack Kerouac and various California "cool school" players, or Langston Hughes and Mingus, the context of this record is ...

All About Jazz (DUNCAN HEINING )
5-STARS Lenny Bruce might have skewered it with his skit, "Psychopathia Sexualis." Mike Myers' mildly misogynist poet might have parodied it in the movie I Married an Axe Murderer (1993). It has been dismissed as a late-fifties fad associated with the Beats. And, yet, the desire of poets and jazz musicians to combine their art forms has proven sur ...

JazzDaGama (Raul da Gama)
Benjamin Boone and Philip Levine's The Poetry of Jazz continues the extraordinary tradition of Charles Mingus and his iconic recordings A Modern Jazz Symposium of Music and Poetry (Bethlehem, 1957) and Weary Blues (Polygram, 1958) with Langston Hughes the recordings of the great Oscar Brown Jr., such as Sin and Soul (Columbia, 1960) and those by Gi ...