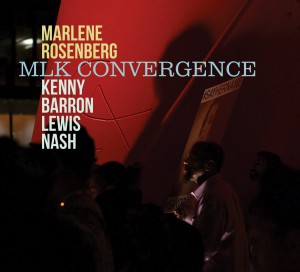 ...real playing by real pros taking the trio format exactly where you want it to be...
Midwest Record

"MLK" is an acronym for this superlative trio of Chicago bassist Marlene Rosenberg, drummer Lewis Nash and pianist Kenny Barron and of course, iconically for the great American moral and spiritual leader Martin Luther King, Jr. Balancing the thought of these musicians being people of different colors, heritages, sexes and generations, coming together in great joy and purpose, with recent headlines highlighting a renewed environment of permissible hate, blame and lack of tolerance, was at the forefront as Marlene shaped this program. The music and activism of the '60s provided an inspiration for many of the original compositions, while the current social conditions added an urgency. Her relationships with Kenny and Lewis going back decades contributes the warmth, love and camaraderie that envelops the proceedings, bringing to mind Stevie Wonder's lyric from the closing track, "Loves in Need of Love Today / Don't delay / Send yours in right away."

Midwest Record (Chris Spector)
C'mon, albums like this write their own reviews. Rosenberg surrounded by Kenny Barron and Lewis Nash with Chris McBride and Robert Irving lurking in the background? What else is there to say? With music informed by years of knowing each other and living now in unsettling times akin to the good old civil rights days, this is a bridge date that li ...

Downbeat (Dave Cantor)
EDITOR'S PICKS, July 2019 If you don't know bassist Marlene Rosenberg from her work with Paul Wertico or Ed Thigpen, OK. But she's gigged with a virtual murderers' row of players and had Makaya McCraven in her group before most folks had heard the drummer's name. Origin label honcho and drummer John Bishop had been paying attention, though. ...

All About Jazz (Dan Bilawsky)
4-STARS There's MLK, and then there's MLK. In this particular context we're talking about a three-letter acronym referencing the musical union of bassist Marlene Rosenberg, drummer Lewis Nash, and pianist Kenny Barron. And in broader terms those initials obviously point to the late Martin Luther King, Jr. With MLK Convergence the sounds of the for ...

Jazz Weekly (George W Harris)
No, this is not a tribute to the legacy of Martin Luther King, but instead the MLK monicker refers to the first letter of the names of bassist/leader Marlene Rosenberg, drummer Lewis Nash and pianist Kenny Barron. You can also throw in Christian McBride for a couple cameos, as he bows on the hip blues "And Still We Rise" and digs a deep pulse for ...

JazzHalo (Belgium) (Georges Tonla Briquet)
The CD title is not only a direct reference to Martin Luther King but also to the mixed cultural background of the group members. So a statement like jazz in the sixties. The effect may not be as extreme as that of her great examples from that period, due to the solid composition of her own compositions, the two well-chosen covers from Stevie Wonde ...

Cadence Magazine (Robert Rusch)
There are a number of elements that can influence me as to whether or not I'll write about a CD. Music is of course, foremost, then packaging, historical importance and so forth. I have enjoyed MARLENE ROSENBERG's MLK CONVERGENCE [Origin Records 82781]. On display here is both Rosenberg's bass playing (she has a touch of Mingus there) as well as he ...

Tracce di Jazz (Italy) (Arturo Pepe)
The renowned bassist (and composer) Marlene Rosenberg (already appreciated with the likes of Joe Henderson, Stan Getz, Teddy Edwards, Harold Mabern, Bobby Watson) has assembled for this recording a formidable trio of innate elegance, with a giant of the piano ( Kenny Barron ) and a series of compositions that, in the most classic of ways, turn from ...

Jazz Journal (London) (Francois van de Linde)
Both title and line-up of bassist Marlene Rosenberg's MLK Convergence piqued my interest. MLK is a reference to Reverend Martin Luther King. Rosenberg connects the message of King with horrible tragedies like the strangling of Eric Garner by the police in New York City in 2014. She offers "this music as an expression and in an effort to voice the c ...

Dusty Grooves (Editor)
Bassist Marlene Rosenberg leads a hell of a trio here – one that features Kenny Barron on piano and Lewis Nash on drums – both tremendous players who sound even better in the round, rich company of Rosenberg's bass! Most titles are trio numbers, but driven as much by the bass as by the always-wonderful work of Barron – and the tunes include m ...

Chicago Jazz Magazine (Hrayr Attarian)
Both as an educator and mentor to younger generations, as well as an accomplished composer and bassist, Marlene Rosenberg is a mainstay of Chicago's creative music scene. Her rich and varied career playing with such greats as saxophonist Joe Henderson and drummer Ed Thigpen is not as well documented on recordings as it could be. In fact, there are ...