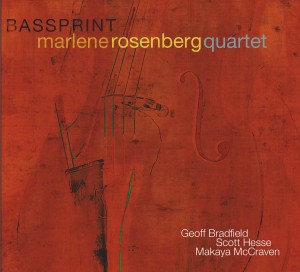 One of the Jazz, Bass, and Music world's treasures! There is a great bass tone, great swing, and lovely fire in everything that Marlene does.
-John Clayton

One of the more talented and multi-faceted bassists on the scene, Marlene Rosenberg lives in Chicago and has performed throughout the world with countless jazz luminaries, including Kenny Barron, Frank Foster, Stan Getz, Joe Henderson, Roy Hargrove, Marian McPartland, Cedar Walton, David "Fathead" Newman, Monty Alexander, Teddy Edwards, Joe Williams, and Nancy Wilson. On Bassprint, she features her Chicago quartet on a set of 9 modern originals and two compositions by a major influence, "Sunshower" and "Lullaby" by pianist Kenny Barron.

Chicago Examiner (Neil Tesser)
(Marlene Rosenberg's "Bassprint")is a splendid effort, showcasing a band with a breezy esthetic, and it boasts plenty of technique and taste from her collaborators: saxist Geof Bradfield, guitarist Scott Hesse, and the rapidly evolving young drummer Makaya McCraven. But from the very first track, even those unfamiliar with Rosenberg might guess ...

The Jazz Word (John Barron)
Chicago bassist Marlene Rosenberg has performed with a host of international jazz luminaries, including Kenny Barron, Frank Foster, Stan Getz and Joe Henderson. A couple of decades ago she recorded with drummer Ed Thigpen on his now classic recording Easy Flight. Her third recording as a leader and debut for Seattle's Origin Records is Bassprint, s ...

Downbeat (John Corbett)
"****" 4-STARS A stalwart member of the Chicago scene, Marlene Rosenberg has made infrequent trips to the studio as a leader. Bassprint is her first CD in a decade, but it's well worth waiting for, and perhaps it shows the value of patience and persistence. Rosenberg is assured at the helm, nothing to prove, no chip on her shoulder. Aside ...

Jazz Scan (Ric Bang)
Relatively few women embrace the acoustic bass; Marlene Rosenberg ? a ?territory? artist born, raised and schooled in Illinois ? has done just that. Although she has played professionally throughout the world, she performs and teaches primarily around Chicago. She began studying clarinet at the age of 10, switched to electric bass in high school ...