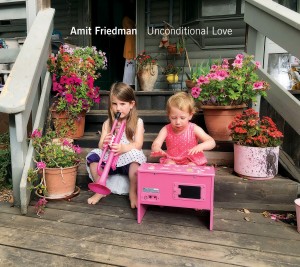 (Friedman's) music often stems from personal, social interaction, and this kind of music finds its way into people's hearts...
Ha'aretz

Saxophonist and composer Amit Friedman is a guiding light in the Israeli jazz scene. His inspiringly lyrical compositions are arranged with his group of master musicians in mind and are rooted solidly in the jazz tradition, along with rich influences of the Middle East interwoven throughout. In the liner notes to "Unconditional Love," Amit recounts the story of his late father taking him, as a young teen, to New York and a night at the Blue Note. Implied is a great sense of gratitude for all of those influencing his life, and with the album's dedication to his father, offers the inspiration behind this collection of performances. Between the fiery "Home At Last," the subtle Bossa, "Alma," with vocals and lyrics by Brazilian vocalist Joca Perpignan, "Rill-Rool," the sweeping duo with pianist Tom Oren, the hard-swinging "Blues for Jackito," or the one cover, the melodic "Junk" by Paul McCartney, Friedman displays a deep connection to 'the moment,' his audience, and those who inspire him. "...Friedman's "Sunrise" is one of those rare albums that I want to blast from the rooftops, convinced that if the whole damn world could just hear it, the planet would be a much happier place." - Dave Sumner, Bird is the Worm

Midwest Record (Chris Spector)
An Israeli sax man that gives your personal jazz more than he does world jazz, even when there's a bunch of middle east woven through it, you just can't take the jazz out of the jazzbo. Kind of a tip of the hat to the father that inspired him, you can feel the personal vibes that keeps the bond alive and well as they easily spring forth. Well don ...

Columbus Music Magazine (Israel) (Yotam Ziv)
Apparently, the first one to steer and use the combination of the words ′′ the whole is bigger than all its parts ′′ was Aristotle. This phrase has many interpretations in different fields, but in my eyes, this is the essence of a good jazz composition. Mostly because creative and inspiring musicians make their friends sound better. A we ...

All About Jazz (Jack Bowers)
Once upon a time, jazz, an American creation, was confined for the most part within its borders. But that was once upon a time. Today, any barriers that once kept jazz within a prescribed realm have long since vanished, and the music Americans once embraced as their own has flourished around the world, performed with increasing awareness and dexter ...

Off Topic Magazine (Italy) (Riccardo Talamazzi)
I don't know the reason for the delay regarding the release of this new record by Amit Friedman , Unconditional Love.Finished recording in the summer of 2018, perhaps due to the pandemic hitch that also hit Israel hard, Friedman's third titular job is only now being released almost three years after its completion. Rightly celebrated in his homelan ...

Cazkolik (Istanbul) (Burak Sulunbaz)
The future of Middle Eastern jazz: Unconditional Love by Amit Friedman, one of the most creative musicians of Israeli jazz, was released on May 7, from Origin Records. Friedman has produced a world music in which we can hear the elements of American jazz, beyond the traditional sound palette of Middle Eastern jazz from that he came from. At the a ...

Le Soir (Belgium) (JEAN-CLAUDE VANTROYEN)
A jazz of today which swings, which grooves, with enthusiasm and who does not ask too many questions. In quartet with Tom Oren at the piano, Gilad Abro on double bass and Yonatan Rosen on drums, plus an oud, a singer and a singer for two pieces. Everything is from Friedman's pen, except "Junk" by Paul McCartney. And if it is sometimes nostalgic, wi ...

Jazz Weekly (George W Harris)
Amit Friedman plays mostly tenor and a bit of soprano sax with his core team of Tom Oren/p, Gilad Abro/b, Yonatan Rosen/dr and guests Rony Iwryn/perc, Doran Talmon/voc and Joca Perpignan/voc on this mix of moods of mostly originals. Friedman shows his warm tone and clean intonation on a duet with the Bill Evansy piano of Oren on " Rill-Cool" ...