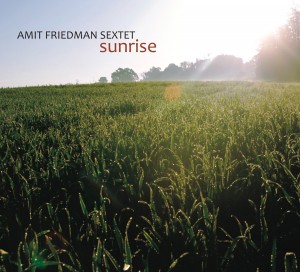 Sunrise may be the strongest album I've heard this year. A majestic album, and my Pick of the Week
Dave Sumner, emusic news

Composer and saxophonist Amit Friedman positions himself as one of today's leading jazz musicians in Israel. Friedman's compositions, combining sophistication and simplicity that communicate to all listeners, his unique arrangements and renowned playing, have captured a wide and varied audience of devoted jazz fans. The music, while loyal to the jazz tradition, fuses within it elements of world music with a special emphasis on Middle Eastern music. In the Sextet's debut album one can hear all the members of the band shine as soloists as well as a cohesive, mature and energetic ensemble that makes music with a flair and spirit of celebration and love of life. Added to the group on a few tracks is a string quartet, playing Friedman's magical arrangements that weave together classical and jazz aesthetics.

All About Jazz (Dan McClenaghan)
This seems to be shaping up as the year of the "Sunrise." Two outstanding sets by that name have been released in 2012: one by the Masabumi Kikuchi Trio on ECM Records, the other a self-produced gem by the Indo/American chamber ensemble, Karavika. Israeli saxophonist Amit Friedman makes it a triptych with his own Sunrise, on Seattle's Origin Rec ...

emusic Review (Dave Sumner)
The debut album for tenor/soprano saxophonist Friedman. Jazz with a Middle Eastern emphasis. Seriously uplifting music. Guitarist Amos Hoffman doubles on oud, and Friedman includes a string quartet to back his sextet. Most of the tracks soar like crazy, but there's some swing going on here, too. Fans of Omer Avital and Abdullah Ibrahim should defi ...

Bird Is The Worm Jazz Blog (Dave Sumner)
Amit Friedman Sextet's Sunrise is one of those rare albums that I want to blast from the rooftops, convinced that if the whole damn world could just hear it, the planet would be a much happier place. It's a majestic album that soars without forgetting to swing. It's unlikely I'll be able to contain my enthusiasm in the words of this revie ...

Midwest Record (Chris Spector)
As the world continues to get smaller, we come to the talents of one of the hardest working jazzbo/sax men in Israel. Leading a talk show band, playing with everyone and working hard to make his sextet's debut make an impact, Friedman keeps making moves to sharpen his chops and make his present felt. With kind of an underlying Paul Winter vibe to ...

Jazz Weekly (George W. Harris)
Here's a guy that keeps with the jazz groove and sounds, but adds some exciting new ideas along the way. Amit Friedman plays tenor, soprano and flute, and teams up with a band that sounds fairly normal, with a pianist (Omri Mor), bassist (Gilad Abro), drummer (Amir Bresler) and percussionist (Rony Iwryn), but stirs the pot a bit with the addition ...

Bird is the Worm Best of 2012 (Dave Sumner)
Number Two: Friedman's blend of Jazz and Middle-East music has had me enthusiastic all year long. An album that often soars, but doesn't forget to swing. This is the kind of joyful music that defines Jazz as something special. Many Jazz albums have a joyful sound, but rarely one as inspiring as Sunrise. It still hits me right square in the heart ...

Third Ear - Israel (Editorial staff)
BEST OF 2012 It was worth waiting for saxophonist Amit Friedman's debut album. The straightforward joie de vivre in his music carries you away, and puts a smile on even the most cynical face. The Israeli sound is familiar and close to home, inviting you in only to discover some surprising facets of the Israeli jazzman. Amit juggles sophisticati ...

Amazon ( Randy Armorhouse )
Through a long life, there have been perhaps half a dozen instances of a piece of music figuratively grabbing me by the throat and DEMANDING my attention, and I'm mesmerized from the very first time I hear it. For whatever reasons (and I wish I had the musical knowledge to identify them), two numbers on this album, "Ups And Downs Interlude" alon ...

Amazon (Schwartzie)
WOW. As a leading jazz instrumentalist in the Israeli Jazz scene, Amit Friedman never ceases to amaze. The sophistication Amit brings to his compositions are fantastic. On the second track "Or", Hebrew for light, really shines through with a comfortably paced groove. it also really enlightens the listener to the influence which the music of Sonn ...

Columbus Music Magazine (Israel) (Yotam Ziv)
BEST ISRAELI JAZZ OF THE DECADE The "sunrise" of composer and saxophonist Amit Friedman came after quite a few years when he played as a sideman with many good musicians. Friedman defines himself as an autodidact. Although he studied jazz at Thelma Yellin and took individual lessons here and there, he paved the way for himself. This is probably wh ... 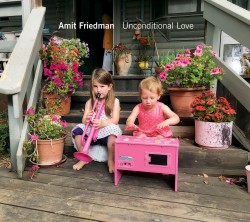