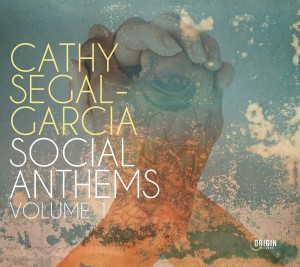 A songwriter and vocal interpreter of uncommon emotional depth and intuitive lyrical insight... Cathy Segal-Garcia has the uncanny ability of discovering deeper, previously uncharted soul territory in a song no matter the surroundings.
JW Vibe

With feelings of profound loss over the direction of the world in the last several years, Los Angeles vocalist Cathy Segal-Garcia found herself searching back through songs from the '60's & '70s - another period of existential uncertainty. The songwriters of the day spoke to those conditions, offering hopes for healing, love and redemption and providing a moral touchstone for a generation. Partnering with supreme musicians, Anthony Wilson, Josh Nelson, Lorca Hart, and Edwin Livingston, Cathy found new paths to voice the feelings at the center of those songs, while adding resonance for these times. Songs from Stephen Stills, Marvin Gaye, Steve Winwood & Peter Gabriel are combined with the Segal-Garcia original, "What Are We Gonna Do." They uplift, add perspective, and console.

"Segal-Garcia uses her deep and expressive voice to suggest more - not hope, not optimism, but perhaps that faith in our ability to rebound." - Marc Phillips

Midwest Record (Chris Spector)
Bob Lefsetz keeps saying things are messy these days because music doesn't drive the culture anymore. Part of the problem is that no one is driving the music. SoCal jazz vocalist Sega Garcia reaches back to the 60s to refashion some anthems the kids aren't punching up on You Tube anyway for a new airing with a new audience. Rounding up some real A ...

L.A. Jazz Scene (Dee Dee McNeil)
One thing I've noticed about vocalist, Cathy Segal-Garcia. She has a unique and lovely way of re-arranging songs to suit her jazzy perspective. You hear this clearly on her new "Social Anthems" album when she opens with the socially relevant composition, "For What It's Worth." The rhythm section arrangement is absolutely wonderful. Some thirty- ...

Sounds of Timeless Jazz (Paula Edelstein)
Social Anthems Volume 1 is an excellent rendition of protest songs covered by vocalist Cathy Segal-Garcia. A child of the Sixties, Ms. Segal-Garcia sings some of the most memorable songs of social importance with exemplary new arrangements. Although these songs were mostly introduced as Folk inspired songs, Segal-Garcia's jazzy updates work really ...

Michael's Music Blog (Michael Doherty)
Certain songs from the past seem to address present troubles. Or perhaps those troubles never went away. Jazz vocalist Cathy Segal-Garcia presents her own renditions of a few of these songs on her new album, beginning with Buffalo Springfield's "For What It's Worth," a song that has popped up a lot lately, especially after the police's response to ...

La Habitacion del Jazz (Editor)
For Cathy Segal-Garcia, a love for music in general and jazz in particular comes from afar. His father was a saxophonist and he loved jazz. Since she was 4 years old, she had taken her to big band rehearsals. She sang with her twin sisters for years. After high school, he went to Berklee College of Music, which at the time did not have a voice ...

The Jazz Owl (Travis Rogers)
Cathy Segal-Garcia is nothing if not prolific. An international performer, to be sure, she is also a Jazz educator and 14-time recording artist. This is a departure but a natural development from 2018's The Jazz Chamber, a brilliant album with a chamber orchestra and joined by fellow vocalists Mon David and Kate McGarry. Now Cathy offers Social ...

Take Effect (Tom Haugen)
The Los Angeles vocalist Cathy Segal-Garcia brings us back to songs from the ‘60s and ‘70s here, where the strong lyrical content suits the many problems we are dealing with in today's society, and she's got Anthony Wilson, Josh Nelson, Lorca Hart, Edwin Livingston, Paul Jost and Mon David to help her on the aptly titled album. "For What It ...

All About Jazz (Troy Dostert)
Proving there is still some life in the spirit of '60s activism—and even in the decades beyond it—vocalist Cathy Segal-Garcia gives us six tracks which meld jazz, folk and pop idioms in a way which sounds both classic and contemporary. Drawing on the talents of a fine band and a couple of intriguing guest vocalists, Segal-Garcia delivers these ...

Jazz 'N' More (Germany) (Dorothea Gangel)
For her 14th album, the Los Angeles-born jazz singer Cathy Segal-Garcia took a look back at the past and rearranged and interpreted unforgettable songs with social content. With Anthony Wilson on guitar, Josh Nelson on piano, Lorca Hart on drums, Edwin Livingston on bass and the two singers Paul Jost and Mon David, Segal-Garcia has brought in selec ... 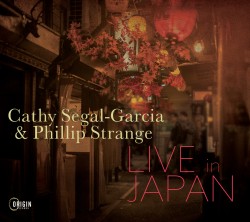