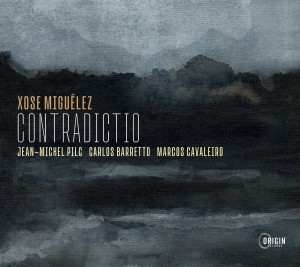 'Contradictio' feeds from tradition - evoking Galicia, Paris, New York - although it does not stop to search for limits but tries to reach for infinity.
Javier Fraiz, Faro de Vigo

From the Galicia region of Spain, saxophonist Xose Miguélez celebrated the traditional melodies of his family, viewed through a modern jazz lens, for the 2019 release Ontology. On Contradictio, Miguélez features the virtuosic French pianist Jean-Michel Pilc, and the music they've been developing together over the last several years with the Portugal-based rhythm team of bassist Carlos Barretto and drummer Marcos Cavaleiro. Together, they deliver prominently contemporary timbres within an organic classic jazz setting. Through a mixture of standards, originals by Miguélez, and a Pilc original dedicated to Galicia, the music unfolds with a spontaneity and life that inspires feelings of a live music experience.

Midwest Record (Chris Spector)
If modern Havana still has back streets like in "Godfather II", this sounds like what those sounds would probably sound like. As the label moves out of it's traditional comfort zones for a date recorded in Portugal, the world wise colorations make a nifty change of pace in the label's generally impeccable canon. With passages that could easily be ...

B!ritmos (Spain) ( Candido Querol )
The Galician composer and saxophonist Xose Miguélez is immersed in the presentation of this new album. You told me that you have given enough interviews to be a rather minority music for yours. What do you think is the reason? I hope it's because the album is being liked a lot. Perhaps also the fact that my previous work, Ontology Origin records, ...

Abrete de Orellas (Spain) (Pepe Cunha )
Following the magnificent "Ontology" (2019) is linked to it through the piece that was titled and that here is reinvented in two versions: in quartet and duet with pianist Jean-Michel Pilc, co-producer of the album. Porén, if not a previous work or saxophonist composed from traditional melodies and oozed more from studio work, "Contradictio" aims ...

All About Jazz (Jane Kozhevnikova)
After an album of Spanish-flavored original tunes, Ontology (Origin Records, 2019), Galicia-based saxophone Xose Miguélez releases Contradictio. Alongside Miguélez, the album features Jean-Michel Pilc on piano, Carlos Barretto on bass and Marcos Cavaleiro on drums. Both Miguélez and Pilc are listed as the album producers. The forceful energy of ...