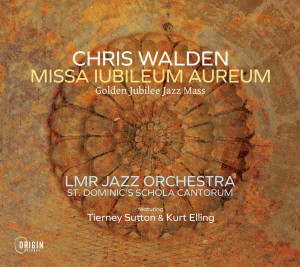 From his own Big Band albums, to his Grammy-nominated Symphony No. 1, or his hundreds of credits in film, TV, and writing for some of the world's biggest artists, composer/arranger Chris Walden has never shied away from monumental musical challenges. With Missa Iubileum Aurem, Walden was commissioned by trombonist & Napa Valley entrepreneur Ted Hall, in celebration of his 50th Wedding Anniversary, to find an original approach to melding jazz with the awe-inspiring tradition of the liturgical Mass. Recruiting "cantors" Kurt Elling and Tierney Sutton, along with the Los Angeles and Bay Area artists of the LMR Jazz Orchestra, and organist Simon Berry with St. Dominic's Schola Cantorum choir, Walden has created a soaring masterpiece.

The work is unique as a jazz composition as it employs the five-part foundational structure of the classical liturgy (Kyrie, Gloria, Credo, Sanctus, Agnus Dei) found in the works of Bach, Mozart, and Handel, among other classical composers. As an integrated single composition, this effort is differentiated from the jazz works of others (e.g., Ellington's Sacred Works) which are collections of individually composed songs.

All compositions and arrangements by Chris Walden in collaboration with Ted Hall.

Jazz Weekly (George W Harris)
Not since Duke Ellington's famed Sacred Concerts has jazz so successfully melded Christian faith with modern music, and not since Bach has it been done with such reverent orthodoxy. Leader and conductor Chris Waldon comes up with the brilliantly inspired (in the true sense of the word) concept of delivering a true jazz mass for the faithful, bri ...

Midwest Record (Chris Spector)
A cat that once played with Thad Jones & Mel Lewis commissions a renowned studio rat to do a real rave up on liturgical music to celebrate his 50th wedding anniversary. Roping in Tierney Sutton and Kurt Elling to help him take it to church, this is a jazz mass like no other. Bold, brassy and contemporary, this work is too encompassing for him not ...

All About Jazz (Jack Bowers)
4-STARS First things first: there is no doubt that Chris Walden's reverential Missa Iubileum Aureum ("Golden Jubilee Jazz Mass") is beautifully written and wonderfully performed by the LMR Jazz Orchestra, St. Dominick's Schola Cantorum and cantors Kurt Elling and Tierney Sutton. Is it jazz? That is another question, one not so easily answered. Whi ...