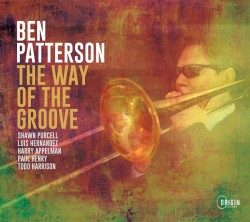 4-STARS Ben Patterson is well versed in the way of the groove. The veteran trombonist, best known for his lengthy stint with the Airmen of Note, uses this date to deliver some hip yet sophisticated work that leans on funky foundations, driving ambitions and glorious grit. Showcasing his impressive slide work alongside a positively electric outfit, Patterson digs deep in offering some slick and seriously smart art. The sum of those elements and efforts equals one brilliant party record that's both sophisticated and accessible.

Teaming up with guitarist Shawn Purcell, pianist/organist Harry Appelman, bassist Paul Henry and drummer Todd Harrison , and adding tenor saxophonist Luis Hernandez on four numbers, Patterson is primed and ready to go from the start. Opening on "Anniversary Patio," he nods to his twentieth wedding anniversary and an attendant home improvement with a propulsive, straight-time sizzler. "Here Now," appreciating the act of being present, approaches the order of the day from a different angle, dialing back the tempo, working with a weighted feel and inviting Purcell to step forward for a raunchy solo stand. Then there's "FLT," which completely fits its expanded "Funky Little Thing" designation; the heated "Stank Face," where Patterson dresses up with effects; "The Lucky One," a jaunty, Caribbean-inflected winner showcasing Henry and Appelman; and the amped-up title track, with room aplenty for horns and guitar to let loose.

Taking a moment apart from his band, Patterson introduces "What Happens Next?" with two minutes of unaccompanied solo work that sets the mood and emphasizes his gifts for emotional expression. Then the composition proper—the longest on the album, at more than eight minutes—deftly balances reflection, curiosity and urgency, with Patterson and Hernandez personifying ecstasy in exchange. Following that standout, things come to a close with the slippery pocket play of "This and That" and the shuffling "Hangin.'" Delivering two head-turning leader dates in two years, Patterson has been quick to elevate his already impressive profile since retiring from a distinguished music career in the military. Here's to hoping he has more music on the way.

Other Reviews of
"The Way of the Groove":