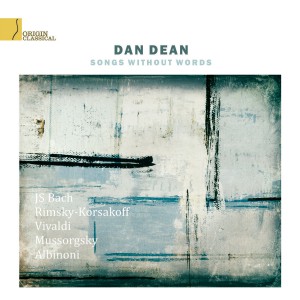 ...music-making of the highest order, which plumbs the depths of all of the emotions from wonderful joys to abject lamentations.
RAUL DA GAMA, JazzDaGama

Achieving international recognition through his 40-year career as a bassist and as an award-winning producer, composer, and recording engineer, Dan Dean is a truly multi-faceted artist constantly seeking new challenges and outlets for expressing the music he hears. For his debut vocal recording, Dean came about it in a very roundabout way. In preparation for a recording of solo bass with string orchestra, Dean arranged works by JS Bach, Vivaldi, Mussorgsky, Rimsky-Korsakoff and Albinoni. With the budget and organizational constraints of recording large ensembles, Dean decided to try adapting the arrangements to his voice. What began as a "what if" experiment turned into a musically ambitious, technically challenging effort. Often angelic, or haunting, or exuberant, "Songs Without Words" is a culmination of his musical experiences over a lifetime, captured by a single microphone.

Reviews of Songs Without Words

All About Jazz (Dan McClenaghan)
4 1/2 STARS Bassist Dan Dean's original plan for this project was the hiring of sixteen string players to join him in the studio to record a set for solo bass with string orchestra: Vivaldi's Concerto For Lute and Orchestra in D Major, along with music from JS Bach, Mussorgsky, Rimsky-Korsakoff and Albononi. The cost for the project proved prohibi ...

Jazz Weekly (George W. Harris)
Wanna know what heaven is going to sound like? Grab a hold of this album and you'll at least have a hint. Dan Dean supplies layers of his voice as well as an occasional bass and whistle to this wonderfully arranged collection of "classic" classics. His wordless vocals create an ethereal mood that floats with sublime joy on Bach's "Air on a G Str ...

Ancient Victorys (Chris Lunn)
This is an unusual and special project. Dan Dean is known for his own groups, recording and mixing, and his collaborations with Tom Collier. I first encountered his works with a couple of different groups at the Other Side of the Tracks in the mid 70s along with his work with Collier, with whom he has been musical buddies even in their teenage year ...

All About Jazz (Dan McClenaghan)
TOP TEN OF 2017 - And lastly - something not jazz: Bassist Dan Dean has created a set of sounds as innovative, in its way, as the 1968's Moog synthesizer-driven Switched on Bach (Columbia Masterworks, 1968), from the forward thinking Walter (Now Wendy) Carlos. Crafting a polar opposite of sorts of the legendary Carlos set, Dean - with just his bass ...

JazzdaGama (Raul da Gama)
After years of playing and producing music for musicians such as vibraphonist Tom Collier, the virtuoso bassist - and it turns out one with rather operatic intentions - and master of the art of whistling as well Dan Dean steps out and into his own studio to record quite magical versions of chorales, arias and concertos without nothing but his velve ...

Midwest Record (Chris Spector)
Recording on Mercer Island and giving the first special thanks credit to Nancy Rumbel - do you think this is going to be your usual egghead classical date? The protean bass player surrounds himself with his ax and his voice and a mic taking warhorse repertoire to places you'd never imagine. Deciding to do it for himself this time around, the unques ...

Author and music critic (Melinda Bargreen)
Dan Dean will redefine what you think is possible to achieve with the human voice. In this recording, he makes his voice an orchestra that "plays" spectacular classics like Mussorgsky's "Night on Bald Mountain," but it's all honest singing: actual sung notes, not sampled and manipulated electronically, What a range, vocally and stylistically; how s ...