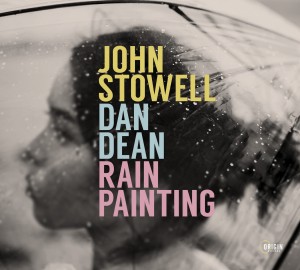 John and his music are unique, from the way he holds his guitar to the voicings he develops for his own sounds. He always has a great deal to say in his quiet, sincere way, and it resonates.
Just Jazz Guitar

Master guitarist and improvisor, John Stowell, has spent the last five decades touring the world, most often immersed in the universal jazz repertoire improvising with artists from wherever he's visiting. Through his recordings with Scenes, and his quartet with SF Bay Area saxophonist Michael Zilber over the last 20 years, Stowell has had the chance to perform and focus on his own compositions more than ever before. It was through the mastering of those recordings that engineer, bassist, vocalist, producer Dan Dean discovered the nuances of Stowell's writing. The idea of collaboration came when Stowell heard Dean's recent classical voice recording, Songs Without Words, where he layered multiple tracks of himself in what writer Raul da Gama called "...music-making of the highest order, which plumbs the depths of all of the emotions from wonderful joys to abject lamentations." Taking 10 of Stowell's compositions, Dean and Stowell layered voices, bass, and guitars over the course of a year, discovering unique avenues into the music with the end result feeling spontaneous, joyous and in the moment.

"Dan Dean will redefine what you think is possible to achieve with the human voice. Prepare to be astonished." - Melinda Bargreen, Author & Music Critic

All compositions by John Stowell/BMI

All About Jazz (Dan Bilawsky)
4-STARS Now here's a uniquely compelling set from two of the Pacific Northwest's great individualists on one of jazz's most stalwart imprints. Guitarist John Stowell and multi-hyphenate Dan Dean have each made their respective marks on many Origin dates in the past. The former's instruments have figured into more than 25 recordings there, from sol ...

Textura (Ron Schepper)
Each a long-time associate of Origin Records, John Stowell and Dan Dean not only show themselves to be exemplary musicians on Rain Painting but exceptional sleight-of-hand artists too. While Dean's a respected bassist and vocalist, he's also established himself as a producer and recording engineer for the label, and it was through the mastering of ...

Cadence (Frank Kohl)
One of the most original and innovative guitarists on the scene today would have to be John Stowell. A true pioneer in methods of playing and composing he stands alone in a sea of guitarists. John's latest release "Rain Painting" gives voice to the intricacies of his compositional skills. Joined by bassist, vocalist and master recording engineer, D ...

Jazz Weekly (George W Harris)
Here's an intimate and intriguing duet created by John Stowell on various guitars and Dan Dean who brings voice, bass, percussion and drum programming to the mix. Dean's voice is hauntingly similar to the likes of Joao Gilberto, but Dean uses it mostly for vocal effects, eschewing lyrics for delicate scats or tones. The team is cozy on the soft "Th ...

Jazz N More (Switzerland) (Florian Biss)
When guitarist John Stowell discovered that Dan Dean, who had taken on the audio mastering of one of his recordings, was also an experimental vocalist and bassist, he asked him to work together with a very open outcome. Over a year ago, new soundtracks were recorded and mixed together in Dean's studio. Once Stowell recorded the themes of his compos ...

Ancient Victorys (Chris Lunn)
Both artists were in duos at our jazz sessions during the late 70s at The Other Side of the Tracks in Auburn. Stowell came up from Portland with David Friesen; Dean did his duo work with vibes player Tom Collier. They were both amazing musicians then and have continued to explore music with a keen inventive sense. This collection is all original tu ...

Jazz Guitar Today (Joe Finn)
I wanted to mention how much I am enjoying the 2021 album "Rain Painting" by John Stowell & Dan Dean. Modernity meets tradition in this collection of Stowell's compositions and Dean's wordless vocal arrangements and bass playing. The guitar, bass and vocal sounds are all very much in keeping with the heritage of the jazz style. And Stowell's playin ...