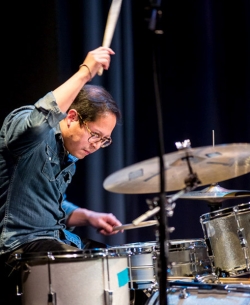 Chris Icasiano has quickly established himself as a force in Seattle's new music and avant-garde jazz scene. He performs regularly in the co-led duo Bad Luck with long-time friend and collaborator, saxophonist Neil Welch, which was recently awarded the 2009 Alternative Jazz Group of the Year by Earshot Jazz. Bad Luck's self-titled debut album was received with much critical acclaim and has been described as, "...one of the finest Seattle Jazz recordings in years - fresh, assured, mature way beyond it's players' ages." (Peter Monaghan, Earshot Jazz). Chris is a co-founder of the local record label Table & Chairs, an organization which has, for two consecutive years, won the Earshot Jazz award for Concert of the Year in 2012 and 1013. Chris is also a co-founder of the New York Times acclaimed music series The Racer Sessions, a weekly composition and improvisation workshop that provides an alternative space for musicians of all backgrounds to come together and participate in collective improvisation. He is a very active contributor the Seattle music scene and has toured extensively throughout the United States and Europe.

Chris is an active educator and clinician around the greater Seattle area.