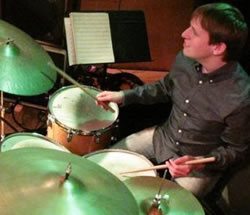 Thomas Morgan was born on August 14, 1981 in Hayward, California. He began to study the cello at the age of seven and continued until the age of fourteen, when his attention turned to the double bass. In May of 2003 he completed his Bachelor of Music degree at the Manhattan School of Music, where he studied with Harvie S and Garry Dial. He has also studied with Ray Brown and Peter Herbert. Thomas has played concerts in New York and abroad with such artists as David Binney, Steve Coleman, Joey Baron, Josh Roseman, Brad Shepik, Steve Cardenas, Kenny Wollesen, Gerald Cleaver, Adam Rogers, and Kenny Werner.  Thomas speaks fluent Esperanto.