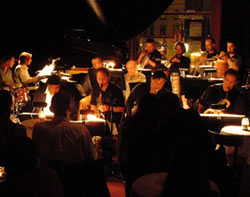 An incredible sound charged out of Pearl's. Horns. Lots of horns, in fact. I marched in and was met immediately with the glorious chaos that is the Contemporary Jazz Orchestra.
San Francisco Examiner

The Contemporary Jazz Orchestra is a 16-piece jazz ensemble featuring top-notch musicians of the Bay Area. As the West Coast's answer to the long-standing tradition of the Vanguard Orchestra in New York City, the CJO has been playing Monday nights at Jazz at Pearl's in San Francisco for over 10 years. In 1995, saxophonist Christopher Pitts hand-selected his players and quickly established the band as an exciting be-bop and post-bop experience featuring the music of Thad Jones, Oliver Nelson, Frank Foster, Duke Ellington and Charles Mingus. In April of 2000, Pitts relocated to Boston, leaving the orchestra in the hands of saxophonist/arranger Alex Budman.