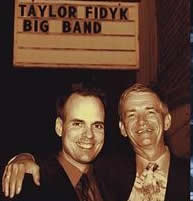 Hard driving & cookin' band with the real deal goods. This is the kind of writing and playing that every big band fan dreams of. A must have in yours and my collections.
John La Barbera

Steve Fidyk is a highly regarded percussionist whose trademark is the fantastic feel that is the soul of whatever musical situation he's in. Whether it's a supportive background or out front, "follow me" leadership, he has the musicianship to move from one to the other seamlessly. His solos always add to the band's momentum because, although he has the chops and imagination to play for hours, the music always comes first.

Mark Taylor is a composer/arranger out of North Texas who recieved notoriety writing for Stan Kenton. He has a large publishing portfolio and has influenced thousands of student musicians, many of whom were first exposed to big band jazz througgh his music. Professionals are inspired by his musicianship, his charts are challenging and they fell "right" on the horn.

The Band With all the vanity CDs out today featuring players whose only apparent interest is "look what I can do," this band is different. These guys are world class players across the board whose main interest is the music. Great musicians don't need to grandstand, they avoid any self indulgence and play it right.