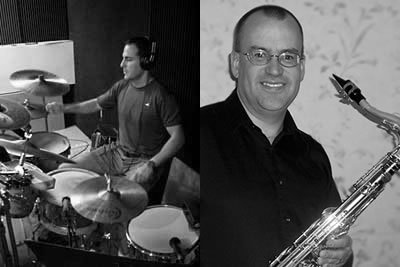 This is an awesome ensemble on all counts: writing, soloing and swinging...
Ed Soph

Multi-instrumentalist Vince Norman and drummer Joe McCarthy have assembled some of the finest big band players on the eastern seaboard to create a creative and swinging ensemble of modern jazz, showcasing the writing of Vince Norman.

Vince Norman, the son of saxophonist Ray Norman who played with the big bands of Claude Thornhill and Charlie Barnett and with Bob Wills and the Texas Playboys in the late forties and early fifties, has been exposed to music all his life.

In 1988, Vince joined The U.S. Army Field Band's "Jazz Ambassadors". He played jazz tenor sax with them for 15 years and has played concert tours in Europe, Japan, India, Mexico and Canada and has played in all 50 states except Alaska. He has performed with such notables as Arturo Sandoval, Clark Terry, Phil Woods, Butch Miles, Marvin Hamlisch, Toots Thielmans, Marvin Stamm, Jamey Aebersold, Tommy Tune, Hal Linden, The Four Aces, The Four Freshmen, The Temptations and even Joan Rivers. He has also performed with the National Symphony, the Baltimore Symphony and with the Cincinnati Pops at several venues including Carnegie Hall.

Vince has written numerous pieces for jazz ensemble as well as several orchestral "pops" commissions for a saxophone quartet called the Capitol Quartet that performs concerts with major symphonies worldwide. Vince is currently on the full time arranging staff for The U.S. Army Field Band and performs extensively in the DC/Baltimore area on saxophone and keyboards as well as playing drums at church each week.
Vince plays and endorses Cannonball Saxophones exclusively.

Joe is the Drummer for the United States Naval Academy Band's Jazz Ensemble, The Next Wave, and Principal Percussionist of the USNA Band's Wind Ensemble.

Active in education, Joe is an Adjunct Professor and instructor of drumset and Afro-Cuban percussion at Georgetown University in Washington DC.