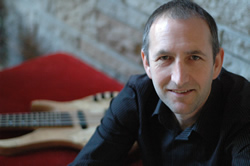 Dean Schmidt is one of the most sought after bassist in the Northwest, well versed in all styles of music. He grew up in Seattle absorbing the music played around the household, mostly rock and roll, his dad having been a big fan of the Beatles and the Rolling Stones. When he was 13 he received a bass guitar for Christmas and immediately took to it. He was self taught until the age twenty, learning records by ear, at which time he moved to Los Angeles to formally study music at the prestigious Musicians Institute of Technology. Through many world class musicians at MIT he was exposed to different idioms such as jazz, latin, brazilian and world music.

After spending six years in Los Angeles playing with different bands, he was hired by the legendary James Burton (Elvis Pressly's guitarist) for a year stint in Waikiki, Hawaii. After Hawaii he relocated to Seattle using this city as his home base for his career as a freelance and studio bassist. Known for his solid time feel and choice of notes he was hired out for international tours in Turkey, South East Asia and Japan. He then spent four years with singer extraordinaire Jane Powell on Norwegian Cruise Line. In the last two years he has performed with legend Pat Boone and LA based jazz group The David Becker Tribune.