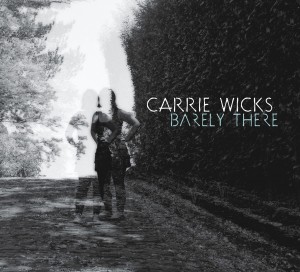 Proclaimed "...an extraordinary debut, a first-rate jazz vocal effort" by All About Jazz, Carrie Wicks's 2010 debut created great anticipation for what this "gorgeously warm and intimate" voice would do for a follow-up. That time has come as Wicks reassembles the same creatively sympathetic group, offering up another interesting set of music including standards such as "Laura" and "A Kiss to Build a Dream On," to Townes Van Zandt's "No Place to Fall," to eight of Wicks's original songs penned with her writing partner Ken Nottingham.

Reviews of Barely There

Midwest Record (Chris Spector)
A jazz vocalist that writes 'em too checks in with her second set that shows the promises made on her auspicious debut were no mere empty promises. Swinging nicely with her cohorts, Wicks can be obliquely sexy or meet classic vocal material head on. Easy to like stuff that simply works well. ...

All About Jazz (Dan McClenaghan)
Vocalist Carrie Wicks' debut was 2010's I'll Get Around To It (OA2 Records). She slipped her original composition, the disc's title tune that she co-wrote with bassist Ken Nottingham, onto the CD, along with a bunch of well-chosen songs from the 1940s and '50s, with Elvis Costello's timeless "Almost Blue" nudged in there, too. It all fit. I ...

Examiner.com (Carol Banks Weber)
The Doors/Jim Morrison fascination is all over Carrie Wicks' Barely There. But there's also a Billie Holiday in this modern-day, Seattle-based jazz vocalist. Wicks flies under the radar among the bigger names and flashier associations in a city that never gives an inch. But she's worth a listen in her sophomore album, the 2012 gem Barely There. ...